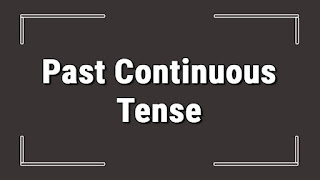 The Meaning of Past Continuous Tense

The past continuous tense is used to describe actions that began in the past and often continued for a short period of time after the action started. This tense describes actions or events that happened at a specific time in the past. These actions are usually no longer happening at the time the sentence is being said or written.

The past continuous (past progressive) is a verb tense which is used to show that an ongoing past action was happening at a specific moment of interruption, or that two ongoing actions were happening at the same time. Read on for detailed descriptions, examples, and past continuous exercises.

Past continuous tense expresses the actions or task that were ongoing in the past. We cannot determine when the action started or finished. For example, When I was walking yesterday, it started raining.

The past continuous describes actions or events in a time before now, which began in the past and were still going on when another event occurred.

How do we make the Past Continuous tense?

The structure of the past continuous tense is:

The auxiliary verb (be) is conjugated in the Past Simple: was, were

The main verb is invariable in present participle form: -ing

For negative sentences we insert not between the auxiliary verb and the main verb.

For question sentences, we exchange the subject and the auxiliary verb.

Look at these example sentences with the Past Continuous tense:

How do we use the Past Continuous tense?

The Past Continuous tense expresses action at a particular moment in the past. The action started before that moment but has not finished at that moment. For example, yesterday I watched a film on TV. The film started at 7pm and finished at 9pm.

When we use the Past Continuous tense, our listener usually knows or understands what time we are talking about.

I was working at 10pm last night.

They were not playing football at 9am this morning.

What were you doing at 10pm last night?

What were you doing when he arrived?

She was cooking when I telephoned her.

We were having dinner when it started to rain.

Ram went home early because it was snowing.

Note that some verbs cannot be used in continuous/progressive tenses.

“James Bond was driving through town. It was raining. The wind was blowing hard. Nobody was walking in the streets. Suddenly, Bond saw the killer in a telephone box…”

Past Continuous + Past Simple

In the following example, we have two actions:

We can join these two actions with when:

Notice that “when you telephoned” is also a way of defining the time (8pm).

There are four basic combinations:

Notice that the long action and short action are relative.

MORE ISSUES ON PAST CONTINUOUS TENSE

USE 1 Interrupted Action in the Past

USE 2 Specific Time as an Interruption

In USE 1, described above, the past continuous is interrupted by a shorter action in the simple past. However, you can also use a specific time as an interruption.

When you use the past continuous with two actions in the same sentence, it expresses the idea that both actions were happening at the same time. The actions are parallel.

In English, we often use a series of parallel actions to describe the atmosphere at a particular time in the past.

USE 5 Repetition and Irritation with Always

The past continuous with words such as always or constantly expresses the idea that something irritating or shocking often happened in the past. The concept is very similar to the expression used to but with negative emotion. Remember to put the words always or constantly between be and verb+ing.

You can do this grammar quiz. It tests what you learned on the Past Continuous page.