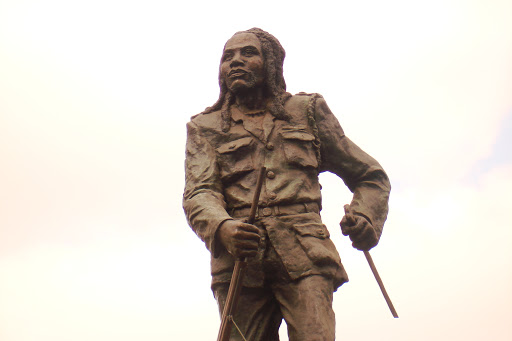 THE TRIAL OF DEDAN KIMATHI

The play was first published in 1976, Ngũgĩ wa Thiong'o and his collaborator, Micere Githae Mugo, built a powerful and challenging play out of the circumstances surrounding the 1956 trial of Dedan Kimathi, the celebrated Kenyan hero who led the Mau Mau rebellion against the British colonial regime in Kenya and was eventually hanged. A highly controversial character, Kimathi’s life has been subject to intense propaganda by both the British government, who saw him as a vicious terrorist, and Kenyan nationalists, who viewed him as a man of great courage and commitment.

Writing in the 1970s, the playwrights’ response to colonialist writings about the Mau Mau movement in The Trial of Dedan Kimathi is to sing the praises of the deeds of this hero of the resistance who refused to surrender to British imperialism. It is not a reproduction of the farcical “trial” at Nyeri. Rather, according to the preface, it is “an imaginative recreation and interpretation of the collective will of the Kenyan peasants and workers in their refusal to break under sixty years of colonial torture and ruthless oppression by the British ruling classes and their continued determination to resist exploitation, oppression and new forms of enslavement.”