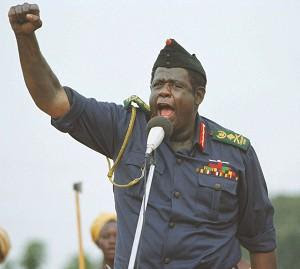 Building the nation is a poem by a Ugandan poet Christopher Henry Muwanga Barlow (1929-2006). was a Ugandan poet notable for his poem Building the Nation. He was one of the recipients of the Uganda Golden Jubilee medals in 2013. Henry Barlow attended King's College Budo (1936–48), where he excelled in cricket and lawn tennis. It was at Budo that Barlow discovered poetry. He joined Makerere University College (1949–53), graduating with a BA degree (London). He was among the 13 pioneer graduates to be awarded degrees. Before, the university used to award only diplomas.

Today I did my share
In building the nation.
I drove the permanent secretary
To an important urgent function
In fact to a luncheon at the Vic.

The menu reflected its importance
Cold Bell beer with small talk,
Then fried chicken with niceties
Wine to fill the hollowness of the laughs
Ice-ream to cover the stereotype jokes
Coffee to keep the PS awake on return journey.

I drove the permanent secretary back.
He yawned many times in the back of the car
Then to keep awake, he suddenly asked,
Did you have any lunch friend?
I replied looking straight ahead
And secretly smiling at his belated concern
That I had not, but was sliming!

Upon which he said with a seriousness
That amused more than annoyed me,
Mwananchi, I too had none!
I attended to matters of state.
Highly delicate diplomatic duties you know,
And friend, it goes against my grain,
Causes me stomach ulcers and wind.
Ah, he continued, yawning again,
The pains we suffer in building the nation!
So the PS had ulcers too!
My ulcers I think are equally painful
Only they are caused by hunger,
No sumptuous lunches!

So two nation builders
Arrived home this evening
With terrible stomach pains
The result of building the nation
Different ways.

The poem principally explores the lifestyle of African bourgeoisie who came to power after colonialism and ideally, simply replaced the coloniser. There is a need for African leaders to create hope for those they lead but they are caught up in the same evil lifestyle of their colonial predecessors. The aspects of nation building which were supposed to dominate public and political policies have been thrust to the periphery of human thought. In a way, the persona calls for a reaction towards the ruling class’s hypocritical nation building where they pretend to have welfare of the masses at heart while in real sense they just want to capitalize on their efforts.

DISILLUSIONMENT/DISAPPOINTMENT
The kind of disillusionment portrayed in the poem is that which Africans have towards their leaders who have adopted the very tenets of the colonisers from whom they got power. Essentially, the idea of nation building turns out to be a very complicated phenomenon where those who are central to the process have their efforts wasted by leaders who can implement policies.
The persona shows more disillusionment by stating that at the meeting “the menu reflected its importance/ Cold Bell beer with small talks/ Then fried chicken with niceties/ wine…/ ice cream …/coffee… (lines 6-11). This reflects the triviality of a meeting where serious issues were supposed to be discussed.

LIES AND HYPOCRISY.
This has been a vital tool for most politicians when they want to win more votes from the ignorant masses. They make heaps of lies on the optimistic crowds but eventually everything turns out only a nightmare. The PS lies to the driver that he did not have any meal just as did the driver yet you and I know that he had a very heavy and sumptuous lunch.  He even shows his hypocrisy more clearly when he asks this question. “then to keep awake he suddenly asked/Did you have any lunch friend?”. It is rather sad to note that he does not ask whether the driver has eaten anything because he is concerned about his welfare, but it is simply to keep himself awake throughout the journey.
CLASSES/MARGINALIZATION
In a broader way the poem thoroughly depicts two classes in one society. There is high class and lower class. Both of them are supposed to mutually benefit from the national resources, yet the high class that is represented by the PS exploits the lower class that more often than not comprises those who are involved in the modes of production. For example the chauffeur drives the PS to the place where there is feasting (eating) while the driver does not take part in the feasting. The persona himself comes from the marginalized class. The role of both classes is building the nation, but the high class has just become the parasites who feed on the national resources at the expense of the masses. They are not building the nation at all but building their stomachs.

EXPLOITATION
Furthermore in the poem, the two parties represent the two strands of nation builders that are in most African states. On one side there are those represented by the driver (the local masses) while on the other hand we have high class being represented by the PS. The later is very busy squandering the public funds which can be used to rebuild the nations. The masses are the hardworking people whose benevolence is easily taken for granted by those in power. There are those who eat extravagantly and those who work on empty stomachs. The persona knows about this exploitation done by African leaders and informs his fellow countrymen what is actually happening.

AWARENESS
The poem paints a picture of awareness that those who are oppressed, exploited and marginalised are now aware of what is happening. This is an important step as long as the liberation of the oppressed is concerned. It is also a significant step if the nation is to realise sustainable development where the national resources will be mutually utilized for the benefit of not only the ruling class but the masses as well.
If we examine the end of the poem, it seems to induce a kind of anger that should lead to vengeance (revenge). The persona is appealing to the oppressed to rise to the occasion and deal with the ruling class.
The fact that “two nation builders/ arrived home this evening/with terrible stomach pain/the result of building the nation/different ways” is more like an appeal to emotions where the persona seeks actions from the masses.

MISUSE OF PUBLIC RESOURCES.
The persona shows that the PS goes to the meeting where important matters were supposed to be discussed. Instead the PS meets his friends and all they do is eating, cracking jokes and laughing. If we need to do well at nation building we must respect everything that belongs to the state. We must not misuse the public funds, the working hours and the state properties like cars for our own interests. The PS goes to feast using the government car, and after the feast he is driven back home. So he wastes not only the public resources but also the working hours.

REPERCUSSION OF OUR LIFESTYLE.
Nevertheless, the persona seems to have hopes in some facts that both the African bourgeoisie and the proletariats have their points of vulnerability. They both suffer in one way or another because of their own actions and lifestyles. For instance the driver becomes sick because of lack of food while the PS becomes sick for eating too much.
So Ps has ulcers too!
My ulcers I think are equally painful
Only they are caused by hunger,
No sumptuous lunches!

MESSAGES.
Ø  If we wish to do well in nation building we must as public servants respect everything that belongs to the state; money, property, working hours etc.
Ø  If the high class is not careful with nation building one day the oppressed may revolt.
Ø  Hypocrisy, classes, and exploitation should be discouraged.
Ø  Awareness is very important in the liberation of the oppressed.
Ø  All human beings have their points of vulnerability. They both suffer in one way or another because of their own actions and lifestyles

RELEVANCE
Ø  The poem is relevant in our country in a number of ways.
Ø  Today we have a lot of leaders who misuse the public funds while those who are involved in the means of production live in dire poverty.
Ø  Hypocrisy, Classes, exploitation and marginalization are also major issues in our society.

a.    What is the poem about?
The poem is about the concept of nation building as taken by African bourgeoisie class who came to power after colonialism. The poet shows that independence was just the change in colour but the leaders adopted the very tenets of their predecessors.

b.    Who is the persona? How do you know?
The persona is a driver (chauffeur) who represents the low class.
In line 3 he says “I drove the permanent secretary”

c.    Suggest some literary and poetic devices used in the poem.
i.        Alliteration
Highly delicate diplomatic duties..
And secretly smiling…
Cold Bell beer
ii.        Barbarism
Mwananchi, I too had none!
iii.        Onomatopoeia
Ah, he continued yawning again.
This is the sound of yawning
iv.        Satire
To an important urgent function
In fact to a luncheon at the Vic.
Lunch is called an important urgent function, this is very satirical
v.        Irony.
The title of the poem ‘Building the Nation” is ironical because the guys in the poem were not building the nation.

d.    Why did the PS ask the question “Did you have any lunch friend?”
It was just to keep himself awake throughout the journey and not because he is concerned about the welfare of the driver.

e.    What is the tone and mood of the poem?
The tone is both sad and ironical/satirical and the mood is angry and hatred towards the ruling class.

f.        What type of the poem is this?
It is a lyric poem as it expresses the strong feelings of the chauffeur but it can also be a narrative poem as it tells the story about the PS.

g.  The poet says in the last stanza ‘so two nation builders arrived home this evening’ were the two people building the nation?
Not really. The poet uses this as a satire to criticise the idea that people always claim to build the nation but they end up building their stomachs.