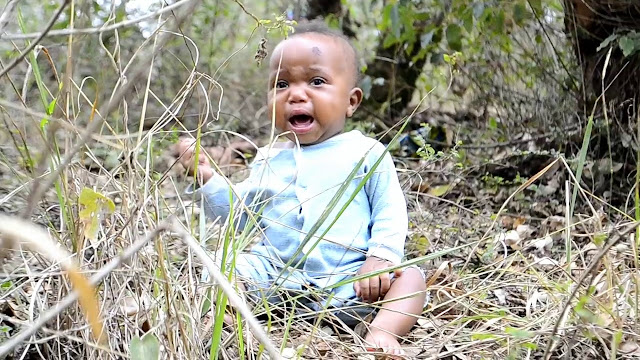 
Oswald Mbuyiseni Mtshali was born in Kwa Zulu Natal, South Africa in 1940. After completing secondary school in he went to Soweto hoping to study social work. Apartheid legislation prevented his enrolment but he studied via correspondence, obtaining a diploma with Premier School of Journalism and Authorship, affiliated to London University.

After his success as a poet, Mtshali became an educator. He was vice principal of Pace College, a commercial school in Soweto. He taught at the New York City College of Technology.

AN ABANDONED BUNDLE By Oswald M. Mtshali
The morning mist and chimney smoke of White City Jabavu flowed thick yellow as pus oozing from a gigantic sore. It smothered our little houses like fish caught in a net. Scavenging dogs draped in red bandanas of blood fought fiercely for a squirming bundle. I threw a brick; they bared fangs flicked velvet tongues of scarlet and scurried away, leaving a mutilated corpse an infant dumped on a rubbish heap ‘Oh! Baby in the Manger sleep well on human dung.’ Its mother had melted into the rays of the rising sun, her face glittering with innocence her heart pure as untrampled dew.

This poem was written by Oswald M Mtshali a South African poet born in 1940 and it criticises a morally decayed society living at the Withe City Jabavu – a black suburb of Johannesburg. The poet shows a mother who gives birth but drapes the infant in red bandanas (neckerchiefs/scarves) and throws it in the rubbish heap (an abandoned bundle). Taking advantage of the morning mist and smoke the mother leaves the scene feeling innocent. The dogs start eating the baby as the persona finds them and feeling sorry for the baby he throws a stone to scare the dogs.

MORAL DECAY
The poet pictures a society in which there is no sense of humanity. The mother in the poem has lost her sense of humanity and she dares drape her own baby inside the bandanas making a bundle that she throws in the rubbish heap. The moral decay is shown by the irony that the poet postpones until the last stanza so that it may come as a surprise to us. It is insensible to think that a woman who has thrown her baby to be eaten by the scavenging dogs would leave the spot with;
her face glittering with innocence
her heart pure as untrampled dew
This shows how rotten the society is and perhaps she is used of doing this that is why it comes as no surprise to her. While the readers and the persona feel sympathetic of the whole issue it is surprising to note that the mother has no that feeling.

IRRESPONSIBILITY
Many women are irresponsible nowadays when it comes to motherhood and the responsibilities attached to it. They either abort the foetus or abandon the babies in plastic bags and in the hospitals. This is highest level of irresponsibility to think that a woman who waited for nine months to deliver her baby would be so strange o throw the baby and leave it to be eaten by the scavenging dogs. Surprisingly still she goes away registering innocence in her face.
Its mother
had melted into the rays of the rising sun,
her face glittering with innocence
What they do not know is that abortion does not make them remain maidens but mothers of the dead baby.

SYMPATHY
The persona feels sympathetic towards the baby and throws a brick to scare the dogs. The persona shows that the baby was being consumed while alive with the sensibilities of knowing what was going on for he says the bundle was “squirming” (twisting its body perhaps because of pains). But since the dogs had mutilated the baby badly, its body remained there as a “mutilated corpse.” He remained hopeless and had nothing to do as he saw the baby lying hopeless like Jesus was in the manger. All he had to say was;
‘Oh! Baby in the Manger
sleep well
on human dung.’

HYPOCRISY
Many people are hypocrites in our societies. They commit severe crimes but as long as they go unnoticed they pretend to be innocent in the eyes of the people. The mother in the poem is a hypocrite because she has murdered her own child but she leaves the scene putting on her face a glittering innocence to hide her guiltiness.
Its mother
had melted into the rays of the rising sun,
her face glittering with innocence
her heart pure as untrampled dew.
With hypocrites of this nature in the society we cannot create an ideal society we aspire for. These are wolves in a sheep’s clothing.

i) What is the poem about?
The title of this poem “an abandoned bundle” summarises the meaning of the poem as it points out the issue of moral decay in the society. It shows a woman who draped the newly born baby in form of a bundle using the bandanas and abandons it on a rubbish heap to be eaten by dogs.

ii) Who is the persona? How do you know?
The persona is a passer-by who lives at White City Jabavu who witnesses the abandoned baby being consumed by the dogs. This is revealed by the way he says;
I threw a brick;
they bared fangs”

iii) What is the tone of the poem?
The tone is sympathetic to the child but it turns out to be ironical towards the end of the poem as the mother moves away feeling innocent instead of guilty. The mood is also sympathetic.

iv) What type of poem is this? Give reason(s)
It is a free-verse/modern poem of Lyric type as it expresses the strong feelings of sympathy of a passer-by towards the baby.

v) Comment on language use in this poem
The language used is simple and easy to understand and the choice of vocabulary is done well. There are words that make us visualise how corrupt the society is. The poet has also made use of figures of speech to carry the message across.
a.      Irony
The poet uses the words below to express the irony because the mother who has abandoned her baby to be eaten by the dogs is expected to feel guilty and full of remorse. This is not what happens as the poet says;
her face glittering with innocence
her heart pure as untrampled dew.
b.      Simile
Þ    “Chimney smoke of White city Jabavu flowed thick yellow as pus oozing from a gigantic sore”
Þ    It smothered our little houses like fish caught in a net.
Þ    Her heart as pure as untrampled dew
c.       Allusion
The words “Oh! Baby in the Manger” refer to the biblical rendition of Jesus Christ who slept in the Bethlehem Manger.
d.      Imagery
The poet creates visual images of poverty as he describes the White City Jabavu as a place full of “chimney smoke” resembling “pus oozing from a gigantic sore” and the “rubbish heap”. These portray an area where poor people live.
“The mutilated corpse” and “bare fangs” of the dogs portray cruelty to a child and loss of humanity.
e.       Symbolism
Þ    “An abandoned bundle” this represents the babies who are aborted or thrown away everyday by their mothers and they die miserably.
Þ    “The White city Jabavu” this symbolises any society in Africa where women re morally corrupt. They commit crimes but go away feeling innocent without any sense of guilt.
Þ    “The Baby in the Manger” this symbolises the innocence of the child whose life is shortened by the mother.
Þ    “The mother” she represents women who are morally corrupt and have no sense of guilt.

vi.  What message do we get from this poem?
Þ    Women should take the responsibility of taking care of their children.
Þ    Abortion should be discouraged at all costs.
Þ    The government should take stern measures against those who abandon their children (babies)

vii. Briefly comment on the relevance of this poem to your society today.
The poem is very relevant to our society today as there are many women who abort their unborn children or abandon them in the hospitals, roads, rubbish pits, others throw them in the latrine pits.