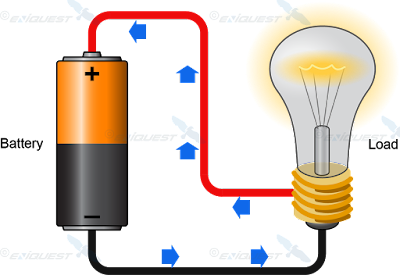 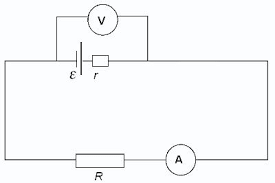 The voltmeter in the following figure shows the ‘lost volts’. 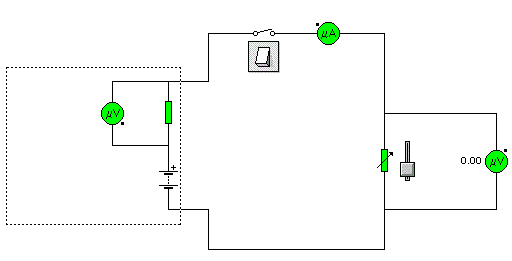 Resistance (R)is an opposition offered by resistor to the flow of an electric current.
From Ohm’s law, R = (V/I)
Resistor is a component that has resistance or is an instrument used to opposes the flow of current.
Variable resistor (rheostat) is a resistor whose resistance can be changed smoothly in order to change the current flowing. 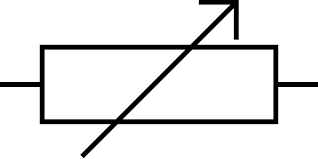 Resistance box consists of a number of resistors connect in series through thick brass blocks (any of the resistors may be short-circuited by putting a plug into the associated socket). 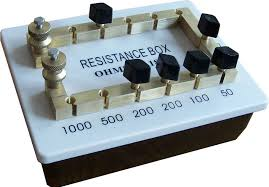 Wire resistorsare lengths of wire of known resistance. The resistors used in electronic circuits are made from carbon or metal film and the value of resistance is shown by colour coded rings.
Resistanceis measured inohms. The resistance of a conductor may be determined by passing a steady current (I) through it and at the same time recording the corresponding voltage across it. 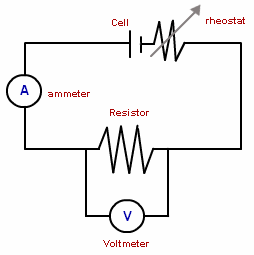 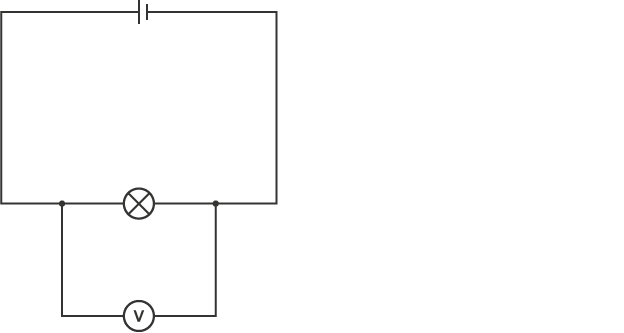 Resistance, RE of the conductor 2.5Ω

Factors which Determine the Resistance of a Conductor
Describe factors which determine the resistance of a conductor
There are three external factors that influence the resistance in a conductor. Thickness (cross sectional area of the wire), length, and temperature all have some effect on the amount of resistance created in a conductor. The fourth factor is the conductivity of the material we are using. Some metals are just more electrically conductive than others. This however, is considered an internal factor rather than an external one. 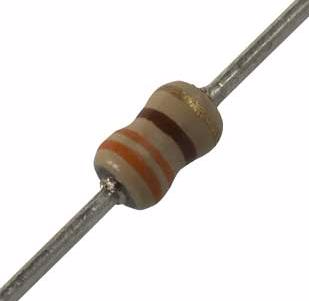 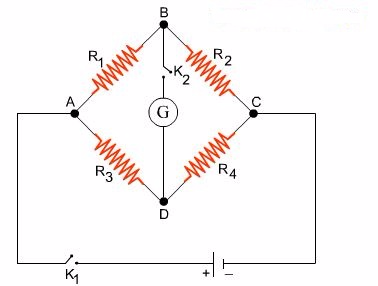 Simple Electric Circuit
Connect and analyse a simple electric circuit
A collection of devices such as resistors and sources in which terminals are connected together by connecting wires is called an electric circuit.These wires converge in nodes, and the devices are called branches of the circuit, as shown in figure below.
The general circuit problem is to find all currents and voltages in the branches of the circuit when the intensities of the sources are known. Such a problem is usually referred to ascircuit analysis.
Remarks-- While the current in a resistor has a fixed relationship with the voltage across it, the current flowing in a voltage source, or the voltage across a current source, is theoretically unrestricted and can assume whatever value governed by the external circuit. 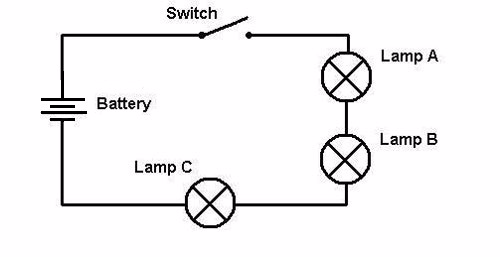 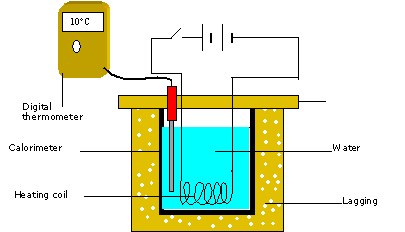 When you close key K an electric current flows thought the wire resistor and the water heats up, showing that the electrical energy is being converted to heat. Suppose the increase in temperature of the water is Q. Then, the heat gained by the water is given by:
H = MCQ

Factors which determines the Quality of Heat Generated in a Conductor due to a Current
Describe factors which determine the quality of heat generated in a conductor due to a current
H is directly proportional to Q.
When we combine the equations, wefind that
H is proportional to I2Rt
Hence
By Ohm’s law
SI Unit of energy is Joule (J).
Equation: H = (V2t) is joule’s law of heating.
Joule is the work done when a change of one coulomb flows through a conductor with a potential difference (p.d) of 1 volt a cross it in one second.
Example 3
An electric Kettle has a wire of Resistance 5Ω. 1kg of water is to be heated from room temperature (300k) up to its boiling point (373k). Using the kettle, if we ignore the thermal capacity of the kettle, what current must flow in the resistance wire if the water is to be heated in 10 minutes?
(Specific Heat capacity of water = 4200J/Kgk )
Data Given
Solution
The thermal energy Gained by water
H = MCQ
= (Ikg x 4200J/Kgk x 73K)
= 3.066 x 105 J
Electrical energy delivered by a current I flowing is
H = I2Rt
= 3 x 103I2J
Thermal energy gained = Electrical energy delivered. 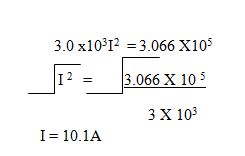 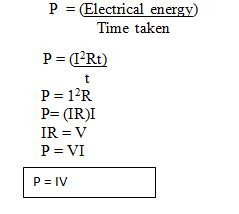 Every electrical appliance should Cary a label starting with the potential difference for which it is designed and the power it can convert when operating at the stated potential difference.
Example 4
Calculate (a) the current taken and (b) the resistance of the plate of an electric iron rated 240v, 2000W. 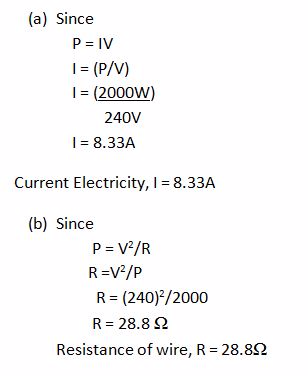 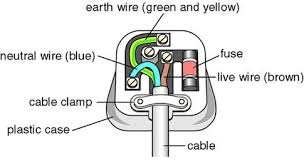 The Function of a Fuse and a Circuit Breaker
Describe the function of a fuse and a circuit breaker
Fuse is an electrical instrument which is composed of the thin wire of aluminum or copper insulated with rubber or plastic which melts when current exceeds its normal value. Fuse can also be described as a short piece of special wire which melts when more than a rated amount of current passes thought it.
Circuit Breakers:These are sensitive switches that turn off the current when there is a surge of current following a fault they can be reset simply by flicking the switch to the ‘on’ position.

Elecrical Faults in Domestic Appliances
Check and rectify electrical faults in domestic appliances
Most faults you will encounter are from a fairly simple cause. Sometimes these are easy to track down sometimes not. The key to success is to use a logical and systematic approach when trying to pinpoint the cause.
A good stating point is to get familiar with your consumer unit whether it is a fuse type or a circuit breaker type.
Identify what circuits you have and what they do:You'll probably have several lighting circuits, probably one on each floor and several socket circuits (ring circuits) one on each floor. Additionally you may have several circuits for individual applianceslike cookers, electric showers, alarms, out-door power, etc.
In the event of a fault you may find a fuse blows or a circuit breaker trips on one of these circuits. Clearly the problem is limited to that one circuit. You can try to reset the breaker or change the fuse. This may well solve the problem if it has been caused by a temporary overload.If the fuse blows again or the breaker trips you still have a fault and need to investigate that circuit.
Either, the circuit is drawing too much current(which could be the result of a faulty appliance or you've got too many appliances for the rating of that circuit),Or, there is a short circuit which means somewhere you have a live wire touching something it shouldn't, which will be due to one of several possible causes.
Appliances not working? 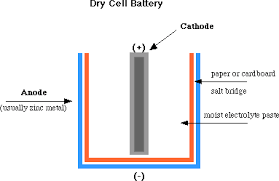 Connecting in series (double voltage, same capacity [ah]
Connecting in parallel
When connecting cells in parallel, you are doubling the capacity (amp hours) of the battery while maintaining the voltage of one of the individual batteries. This would be used in applications such as laptop batteries, some scooters, some ups backups, etc. Use a jumper wire between the positives of both batteries and another jumper wire between the negatives of both batteries. Connect your positive and negative wires to the same battery to run to your application.

The Cell Defects
Identify the cell defects
Simple Have two main defects which cause the current to diminish quickly when the cell is being used.
Two defects of simple cell are:
Polarisation
Polarisation is the defect occurs in simple cell caused by the formation of hydrogen bubbles around the copper plate.These bubbles insulate the copper plate and prevent other positive hydrogen ions from receiving electrons from the copper plate to become neutral.
Also hydrogen ions accumulating at the copper plate repels other Hydrogen ions ( This defect is called Back e.m.f and opposes or weakens the main e.m.f of the cell).
How to minimize polarisation
Local Action
Local action is the process by which a cell is used up when no external current is flowing.Commercial zinc normally contains atoms of Iron, lead, carbon, etc called impurities.
When commercially zinc is used in a simple cell, bubbles of hydrogen are seen escaping from the zinc plate (evidence of local Action).The Impurities on the surface of the Zinc act as a second plate of a cell. As a result, Zinc dissolves in the acid even when the cell is not in use (This process wastes the zinc)
How to minimize local action
The problem of local action can be overcome by using amalgamated zinc plate (zinc coated with mercury).
Pure zinc in mercury form zinc amalgam.This is done by rubbing some mercury on the zinc plate.
The leclanche cell:Is the cell uses an aqueous solution of ammonium chloride (sal ammoniac) as the electrolyte, amalgamated zinc rod as cathode. The carbon rod as anode fixed in a porous pot, containing a powdered mixture of carbon and manganese (iv) oxide.
The carbon makes the mixture more conducting, and the manganese (IV) oxide (manganese dioxide,MnO2) acts as a depolarizer.
The Dry cell
Is a modified leclanche cell in which the main electrolyte is a paste of starch and ammonium chloride. The action of the cell is similar to that of the wet leclanche cell.
The paste is prevented from drying by sealing the top of cell with some insulating materials. This type of cell gives a larger current and have a shorter recovery (demoralising time) than the 'wet’ type;
Hence it is useful for a greater variety of applications.However, Local action cannot be eliminated completely in these cells, so that the cells have a storage (or shelf) life ranging from a few months to up to several years if stored in a cool place
The leclanche cell is called a primary cell and this type of cell current is produced from a non recoverable or irreversible chemical reaction.
Example:When all the zinc has been dissolved in the simple cell it can never be recovered to its original form by passing a current thought the cell in the opposite direction.
Secondary cell
This is the cell which can be recharged after it hasrun down (used). This is done by passing a d.c current from a dynamo or similar device through the cell in the opposite direction to that in which the cell usually supplies current in an external circuit.
Also called storage cells or accumulator some common accumulators are:
The main advantage of this type of cell is that it has a very low internal resistance and can therefore give a large current with very little drop in the terminal potential difference.
The Mode of Action of Lead-acid accumulator
Describe the mode of action of lead-acid accumulator
The lead – acid accumulator cell consists of two plates of lead immersed in sulphuric acid.The acid is in a plastic container.Two or more cells may be connected to forms battery
The positive terminal is lead (iv) oxide and the negative terminal is lead.
Wood / rubber/ separator/Insulator
Cathode electrode: Lead plate (–)
Anode Electrode:lead (iv) oxide (+)
Before the accumulator is use it has to be charged
The Charging and Discharging Phenomenon of an Accumulator
Explain the charging and discharging phenomenon of an accumulator
Charging is done by connecting across its plates as source of direct current. If the current of 2A may be allowed to flow across the terminal of the cell. The positive terminals of the cell and the source of current (dynamo) must be connected together similar the negative terminal must be connected together.
If the cell is now fully charged the p.d across its terminals on open circuit is 2v, and the cell is ready for use.It can light says a2v electric lamp connected across its terminals. The currents will flow in the reverse direction to the charging current.
Discharging Accumulator
Cells and Accumulators in Daily Life
Use cells and accumulators in daily life
Uses of electric cells