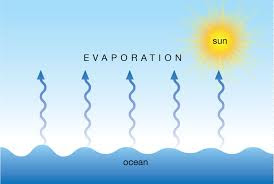 Difference between Saturated and Evaporation of a Liquid
Distinguish between saturated and evaporation of a liquid
Vapours
The molecules in a liquid are in a state of continuous motion and some of those at the liquid surface will gain sufficient energy to escape from the surface altogether. The molecules that have left the surface are said to be in the vapour state. The difference between a vapour and a gas is purely one of temperature, a vapour being a gas below its critical temperature.
This phenomenon is known as evaporation. The number of molecules leaving the surface, and hence the rate of evaporation, will increase with temperature as the liquid contains more energy at a higher temperature. The effect of the evaporation of a liquid can be shown clearly by the following experiment.
Some ether is run into the flask, as shown in the figure below. It will evaporate in the enclosed space and the pressure that it exerts on the water will force a jet of water out of the tube. Warming the liquid will increase this evaporation and give a more powerful jet.

You can show that the rate of evaporation may be increased by:
Saturated vapours
When a liquid is in a closed container the space above the liquid is full of vapour, and the vapour is then described as a saturated vapour - this means that the density of the liquid molecules in the air is a maximum. This is due to molecules continually escaping and reentering the liquid. At any moment the number of molecules leaving the surface will be equal to the number returning to it and so a dynamic equilibrium is set up.
The properties of saturated vapours were first investigated by Dalton around 1800. This is shown in Figure 2(a), which shows a state before saturation has been reached (when there will be more molecules leaving the surface than returning to it) and Figure 2(b), which shows the saturated state. A dynamic equilibrium exits here. 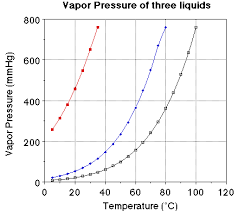 The graph of saturated vapour pressure (svp) against Temperature
The graph shows as saturated vapour pressure (s.v.p) increases then the temperature will increase and vice versa for decrease of temperature.
Boiling point (B.P):Is the temperature reached where the saturated vapour pressure (S.V.P) is equal to external atmospheric pressure.
The Boiling point of alcohol is 78OC water is 100OC and pressure of the atmosphere as 76cm of mercury.The intersection of the normal atmosphere pressure line with the liquids S.V.P curve.
Humidity
The Concept of Humidity
Explain the concept of humidity
HUMIDITY is the measure of the extent to which the atmosphere contains water vapour (moisture).
The Formation of Dew
Explain the formation of dew
DEW:These are deposits formed when the temperature fall slowly in the drops of water vapour.
Dew point (D.P): Is the temperature to which air must be cooled to become saturated. For example in an air container, if water vapour at pressure of 8mm of mercury were to be cooled , dew would form at 7.90C.
Measurement of Relative Humidity
Measure relative humidity
Absolute humidity is the mass of water vapour present in a unit volume of it and is usually expressed in grams per cubic metre (g/m3). The absolute humidity is not very frequently used since in practice we're more often concerned with the degree of wetness of the air.
Relative Humidity (R.H) is the ratio of the mass of water vapour actually in a unit volume of air to that is required to saturate it at the same temperature.
R.H = Mass of water vapour/Volume of air required to saturate the air at the same temperature
It is common practice to quote relative Humidity as a fraction or a percentage.
Thus
R.H = m/M X 100%
Where
M = mass of water vapour actually present in a unit of given volume of air.
M= mass of water vapour required to saturate the air at the same temperature.
Relative Humidity is also defined as the saturation vapour pressure of water at the dew point divided by the saturation vapour pressure of water at the original air temperature.
R.H = s.v.p at dew point/s.v.p at air Temperature
Note:The low value of relative humidity of air means that evaporation takes place readily from the surface of water.The high value of relative Humidity then evaporation does not take place readily from the surface of water.
Humid atmosphereis saturated with water vapour.
Perspiration: Is the evaporation of sweat from the skin, is not so effective at cooling the body in humid atmosphere.
Note:
MEASURING RELATIVE HUMIDITY
Hygrometers are instruments used for finding relative humidity at a given place. With most hygrometers, the relative humidity is determined by first finding the dew point and then using vapour pressure tables.
A very common type of Hygrometer (often known as Mason’s hydrometer). A piece of muslin wick is wrapped round the bulb of one the thermometer and its lower and dipped into water capillary action keeps the Muslin wrapped around the bulb wet.
Example 1
If the dry the temperature is 300C when the wet bulb temperature is 20OC then the wet bulb depression is 10oC the rate Evaporation depends on the amount of water Vapour present in the air.
The less moisture the air has the greater the difference between the two thermometer reading.The difference is therefore greatest for dry air and zero for saturated air. 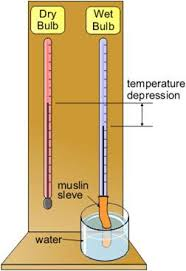 REGNAULT’S HYGROMETER: Is used to determine dew point and relative Humidity.Simplified form of regnault’s hygrometer consist of two test – tubes A and B with silvered ends C and D Respectively.

Above show Regnault (dew point ) hygrometer.
Example 2
The dew point in a room at a temperature of 100c is 12,55C if the saturated vapor pressure if saturated vapor pressures at these two temperatures are 15.5mm and 10.9mm of mercury respectively calculate the Relative Humidity.
Solution
Required: To find relative humidity, RH.
RH = S.V.P at dew pointx 100%/S.V.P at air temperature
RH= 10.9/15.5× 100%
Relative Humidity, RH = 71%

The Knowledge of Humidity in Daily Life
Apply the knowledge of humidity in daily life
Water in the atmosphere exists in different forms example: Clouds, Rain, Snow, Hail stones, Mist, Fog and Smog.
Clouds.
Rain: These are drops of water that fall on the grounds when cooling occurs in the clouds.
Snow: Formed when the dew points is below the freezing point (F.P) 0OC.Under these conditions, the atmospheric vapour condenses directly into ice crystal.
Hail stones
Mist: Is the condensation of vapour Iito water droplets occurring near the ground.
Fog: Is a mist In which Visibility does not extend beyond 1km.
Smog:This is dense fog, where visibility is reducing to a few metres.