Simple Microscope
The Structure of the Simple Microscope
Describe the structure of the simple microscope
A magnifying glass, an ordinary double convex lens with a short focal length, is a simple microscope. For example, reading lens and hand lens. When an object is placed nearer such a lens than its principal focus, i.e., between the principal focus and the lens, an image is produced that is erect and larger than the original object. The image is also virtual; i.e., it cannot be projected on a screen as can a real image. 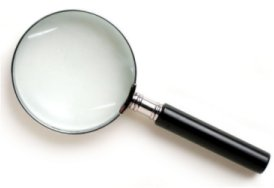 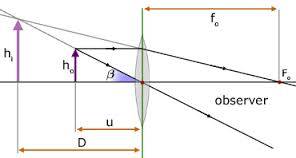 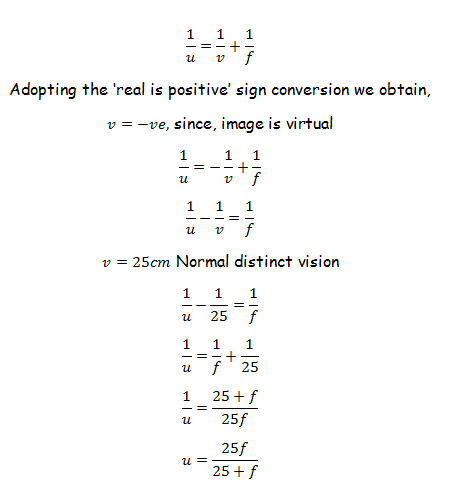 Magnication (M) of simple microscope
Magnification is the ratio of the image distance 'v' to the object distance 'u'. 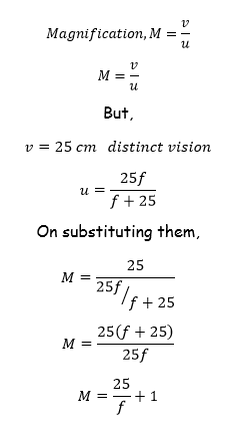 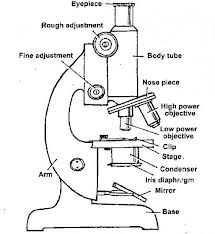 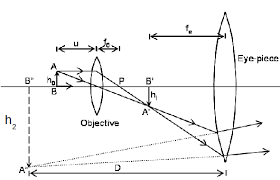 The Mode of Action of a Compound Microscope
Describe the mode of action of a compound microscope
The most commonly used microscope for general purposes is the standard compound microscope. It magnifies the size of the object by a complex system of lens arrangement.
It has a series of two lenses; (i) the objective lens close to the object to be observed and (ii) the ocular lens or eyepiece, through which the image is viewed by eye. Light from a light source (mirror or electric lamp) passes through a thin transparent object.
The objective lens produces a magnified ‘real image’ (first image of the object). This image is again magnified by the ocular lens (eyepiece) to obtain a magnified ‘virtual image’ (final image), which can be seen by eye through the eyepiece. As light passes directly from the source to the eye through the two lenses, the field of vision is brightly illuminated. That is why it is a bright-field microscope.

The Magnification of a Compound Microscope
Determine the magnification of a compound microscope
The object lens forms a real and inverted image IIof the object O ( the image is slightly magnified). The eyepiece lens acts as a magnifying glass for the first image II and produces a magnifical virtual image.
The object is placed just beyond the principal (fo) of the objective lens so that that the real image I, is formed inside the principal focus (F) of the eye piece. The eyepiece treats the real image I, as an object and then forms its magnified virtual image I2.
Magnification of a compound microscope: This isthe ratio of the image distance produced by a compound microscope to the object distance. The magnification produced by objective lens is v/u.
Where
V is the image distance
U is the object distance
The magnification given by the eyepiece is given by;
Me = 25/fe + 1
If the final image is formed at the least distance of distinct vision (V = 25cm).
Mc = Mome
Combine eqn (i) and (ii)
Then
Mc = (v/u) (25/fe+1)
The above formula shows that the final virtual image is formed at the least distance of distinct vision.

The Magnification of an Astronomical Telescope
Determine the magnification of an astronomical telescope
The magnification of a telescope is defined as the ratio of the angel B (in radians) subtended by the final image at the eye to the angle X subtended by a distant object at the eye.
Thus, for telescope the magnification is given by:
M = B/x ………………………………….i
From figure B= IQ/ID ……………………..ii
X = IQ/IA ………………………………………..iii
But Insert eqn (ii) and (iii) into eqn (i)
M = (12/ID)
(IQ/IA)
M = (IA/ID)
But IA = fo and IF =fe
M = fo/fe……………………………….(x)
Where
Example 3
fois the focal length of two thin converging lenses of focal lengths 25cm and 4cm respectively. It is focused on the moon which subtends an angle of 0.6° at the objective lens. The final image is formed at the observers least distance of distinct vision (25cm in front of the eyepiece). Find the diameter of this image.
In the previous figure:
X = h/fo
Where fo is the focal length of the objective lens
X = h/25
Where X is the angle in radians subtended at the objective lens by the moon.
H = 25x
H = 25 (6/10 x 11/180)
H = 25 (6/10 x 22/7 x 1/80)
H = 0.2619m
The height of the image, h = 0.2619m
The distance of this image from the eyepiece is obtained from the relation:
The magnification, m of the lens:
Let the height of the final image of the moon be h:
The Height of image Hi = 1.9cm
Hence
The diameter of the final image of the moon will be 1.90cm
Observation of the universe today are best made from the Hubble Telescope. Outside the Earth’s atmosphere, this telescope suffer from less interference.

Uses of an Astronomical Telescope
Mention uses of an astronomical telescope
Astronomers use telescopes because they're much better than our eyes. Here are a few reasons: 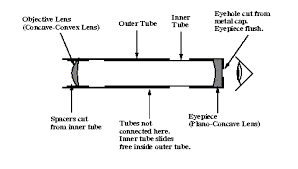 The Lense Camera
The Structure of the Lens Camera
Describe the structure of the lens camera
Lens camera is an instrument which produces an image of object on the screen using light. The basic physical principle of all camera is the same in spite of the variation in the design of cameras.
The optical system of the camera are very similar to that of the lantern projector but with the direction of light reversed.The converging lens forms a real image of the object to be photographed.(This image is diminished (smaller than the object and inverted)
<!--[endif]-->The lens can be moved back and forward with the help of focusing any so that objects at different distances can be brought to the focus.A forced image is locate on the film or plate when the shuttled is open for a suitable amount of time as determined by the shutter speed.
<!--[endif]-->Light enters the camera Box and makes a picture of the object on the film “( The film is sensitive to light)
<!--[endif]-->The camera is equipped with a diagram or light entering the camera.It ensures that is incident centrally on the lens so that the distortion of the image formed is reduced 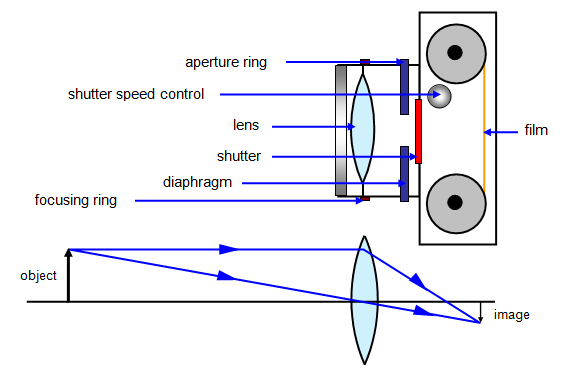 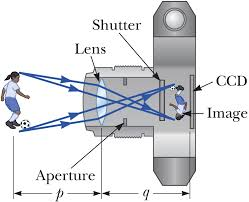 The Human Eye
The Structure of the Human Eye
Describe the structure of the human eye
The eyeball approximately spherical in shape.The wall of this sphere consist of two layers, the outer layer or sclera and the inner layer or choroid.The front portion of the SCLERA FORMS A TRANSPARENT CURVED section called the camera.The choroid layer is balance in order to prevent internal reflection and also to protect the light sensitive parts of the eye.
The aqueous and vitreous hum our are jelly – like substance that fills the spaces within the eyeball.The aqueous humour is the salt solution of refractive index n, 1.38. Vitrous hurmour is a watery , Jelly substance of refractive index 1.34.Behind the cornea there is a colored diagram called the iris.
The iris has the central hole called the pupil. The iris contains muscles which control the size of the pupil. The size of the pupil decreased in the bright light and increased in the dim light.
Behind the pupil and there is a crystalline lens held in position by suspensory ligaments that are attached to the choroid layer.Near the suspensory ligaments are the ciliary muscles.The function of the suspensor ligaments there are the cilliary muscles.
The function of cillary muscles is to control the thickness of the lens. The lens become thick when the ciliary muscles contract and thin when the ciliary muscles are relaxed.
<!--[endif]-->At the back of the eye there is a retina (This is the part of the eye which is sensitive to light).Image formed is inverted formed on the Retina ( This is the part of the eye which is sensitive to light.)
Image formed is inverted formed on the retina by successive refraction of light at the corner, the aqueous hurmour the crystalline lens and the Vitreous hurmour.Electrical signals are then transmitted to the Brain through the topic nerve. Finally, the brain interprets these signals. 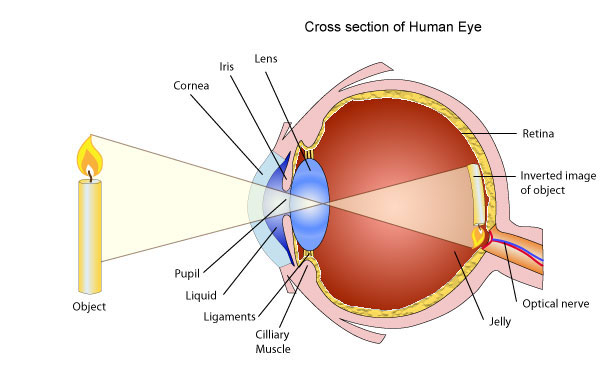 Accommodation Power of the Human Eye
Explain accommodation power of the human eye
Accommodation is the process whereby the eye alters its focal length in order to form images of objects at different distances.
(Thickening or Thinning of the lens causes a change in its focal length).
The thickening or thinning of the crystalline lens is made possible by the action of the ciliary muscles.To view neare object t, ciliuary muscles contract, this makes the lens thicker.
In the relaxed state of ciliary muscles, the crystalline lens become thinner and enables the eye to see (view) distant objects. The farthest point which can be seen clearly is called the far point of the eye and the nearest point is called the near point of the eye.
The corresponding distance from these points to the eye are referred to as the maximum and least distance of district vision respectively.A normal eye (i.e. without defects of vision) has a far point at infinity and near point at a distance of 25cm from the eye.Structure of lens “ view distant object” 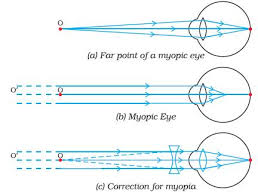 The Correction of the Defects of Human Eye
Describe the correction of the defects of human eye
Myopia is common name for impaired vision in which a person sees near objects clearly while distant objects appear blurred. In such a defective eye, the image of a distantobject is formed in front of the retina and not at the retina itself. Consequently, a nearsighted person cannot focus clearly on an object farther away thanthe far point for the defective eye.
This defect arises because the power of the eye is too great due to the decrease in focal length of the crystalline lens. This may arise due to either

Correction:Thisdefectcan becorrectedby using aconcave (diverging) lens. A concave lens of appropriate power or focal length is able to bring the image of the object back on the retina itself.
Farsightedness, also called hypermetropia, common name for a defect in vision in which a person sees near objects with blurred vision, while distant objects appear in sharp focus. In this case, the image is formed behind the retina.
This defect arises because either
Correction:This defect can be corrected by using a convex (converging) lens of appropriate focal length. When the object is at N’, the eye exerts its maximum power of accommodation. Eyeglasses with converging lenses supply the additional focusing power required for forming the image on the retina.