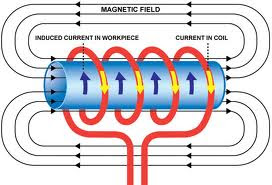 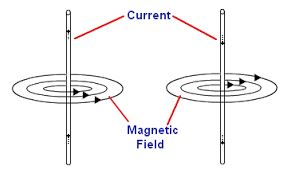 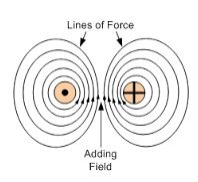 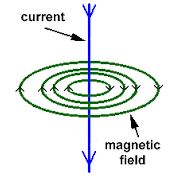 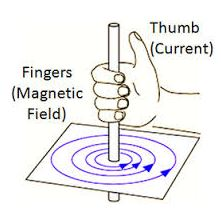 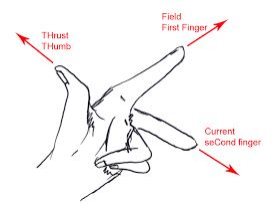 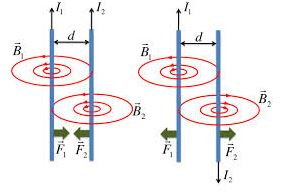 The Concepts of Self and Mutual Induction
Explain the concepts of self and mutual induction
When the current flowing through a conductor varies it creates a varying magnetic field that cuts across the conductor itself.
This results to self-induced e. m .f in the conductor that is opposite in direction to the original e. m. f. This voltage, usually referred to as back e. m .f, tends to limit or reverse the original current.
If the original current is increasing, then the induced current subtracts from it and then measured current is smaller than it would be if no self-induced magnetic field was produced in the conductor. If original current is decreasing, then the original current adds to it and the measured current is greater than it would be if self-induced magnetic field was produced in the conductor. This process is called self-induction since the changing current creates a back e. m. f in itself.
Consider a coil of wire wrapped around a cardboard tube. When the coil is connected to a battery a current flows in the coil producing a magnetic field as shown below.
If the current in the coil begins to increase, the magnetic flux increases. This induces an e. m. f that opposes the battery resulting in a back current that impedes the increase in current. If the current in the coil decreases, the magnetic flux decreases. This induces an e. m .f that adds to the battery resulting in an induced current that impedes the decrease in current.
If we place two coils near each other, a varying current in one coil will induce a current in the other. This is called mutual induction. The coil with a changing current is referred to as the primary coil while that in which a current is induced is the secondary coil.
The e.m.f induced in the secondary coil is proportional to the rate of change of the current in the primary coil.

The Mode of Action of a.c and d.c Generator
Describe the mode of action of a.c and d.c generator
A generators is the device which produces electricity on the basis of electromagnetic induction by the continuous motion of either a coil or a magnet.
A.C Generator or alternator
An arc generator utilizes Faraday’s law of induction, spinning a coil at a constant rate in a magnetic field to induce an oscillating a.m.
The arc generator consists of an armature made up of several turns of insulated wire wound on a soft-iron core. The armature revolves freely on an axis between the poles of a powerful magnet, which provides a strong magnetic field. Two slip rings are connected to the ends of the armature and two carbon brushes rest on the slip rings. 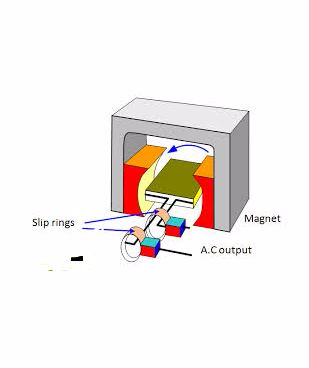 When the coil is vertical, no cutting of the magnetic lines of force takes place although the number of lines linking the coil is maximum. The rate of change magnetic flux is zero and as a result, no a.m. is induced in the coil.
When the armature is parallel to the magnetic field, the rate of change of magnetic flux is maximum and the motion of the coil is perpendicular to the magnetic field, hence an a.m. is induced along the sides of the coil.
After a 180° turn, starting from the vertical position, the sides of the loop interchange and the current in the loop is reversed. This means that the a.m. is positive for one half of the cycle and negative for the half. The maximum induced a.m. is at 90° rotation from the vertical position and the minimum is at 270° rotation. If there is an external circuit, the current through it would also have a maximum value at 90° and minimum at 270°.
This kind of current is called an alternating current and the corresponding a.m. is the alternating e.m.f.The number of cycles produced per second is called the frequency of the arc. The arc obtained is led to an external circuit through the slip rings and the carbon brushes.
D.C generator
It is made by replacing the slip rings in the arc generator with a commentator. Each half of the commentator ring is called a commentator segment and is insulated from the other half. Each end of the rotating loop of the wires connected to a commentator segment. Two carbon brushes connected to the outside circuit rest against the rotating commentator.
In the deck generator, the commentator rotates with the loop of wire, just as the slip rings do with the rotor of an arc generator. 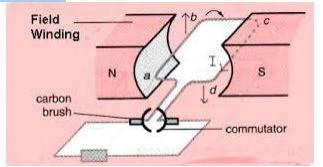 Note: The lower half of the cycle is not cut off but is reversed.

Simple Step-up and Step-down Transformer
Construct a simple step-up and step-down transformer
A transformer is the device that uses mutual induction between two coils to convert an a.c across one coil to a larger or smaller a.c across the other coil.
A transformer is made up of two coils, each with a different number of loops linked by an iron core so that the magnetic flux from one passes through the other. When the flux generated by one coil changes the flux passing through the other will change, inducing a voltage in the second coil.
The coil that provides the flux that is the coil connected to the a.c power source is known as the primary coil while the coil in which the voltage is induced is known as the secondary coil.
When the number of turns in the primary coil (N) is lower than the number in the secondary coil (N),the secondary voltage will be lower than the secondary voltage. This is called the step-down transformer. The opposite of this is called the step-up transformer.