To speed up the decomposition process, and hence collect substantial amount of oxygen gas within a short time, black manganese (IV) oxide is added as a catalyst.

A catalyst is a substance that, although present in small quantities, will alter the rate of a chemical reaction but will remain chemically unchanged at the end of the reaction.
Preparation method
Hydrogen peroxide (20 vol.) is added drop by drop to manganese (IV) oxide, which catalyses the decomposition of the peroxide. Oxygen is collected over water as shown in figure bellow. The gas is collected by downward displacement of water because it is only slightly soluble in water.

Preparation method
A grinded mixture of potassium chlorate and manganese (IV) oxide, at a ratio of 4:1, is placed in hard glass tube and fitted up as shown in figure bellow. The mixture is then heated and oxygen gas is readily given off. The gas is collected over water. Oxygen has almost the same density as air, so it cannot be collected by the upward displacement of air. It is possible to collect it by downward displacement of water as shown in the figure because it is only slightly soluble in water.

Apparatus for laboratory preparation of oxygen from potassium chlorate
Test for oxygen
Oxygen rekindles a glowing splint of wood. No gases behave like this except dinitrogen oxide, NO2, from which oxygen can be distinguished by the following properties:
1. Oxygen has no smell but dinitrogen oxide has a sweet, sickly smell.
2. When heated with nitrogen monoxide, oxygen produces brown fumes of nitrogen dioxide.

Dinitrogen oxide has no effect on nitrogen monoxide. 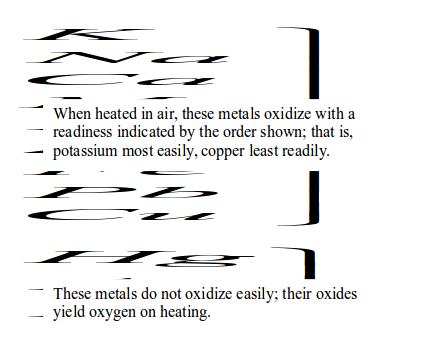 Reaction with specific metals
Sodium
When burnt in excess of oxygen, sodium burns with an intense yellow flame to give sodium peroxide.

The product is a yellow solid which dissolves in water to give an alkaline solution.
Calcium
The metal burns in air with a red flame giving a white solid of calcium oxide:

Iron
Iron burns in air with a shower of sparks leaving a brown-black solid of triiron tetraoxide:

Copper
Copper burns in a stream of oxygen to give a black solid of copper (II) oxide:

Phosphorus
Phosphorus bursts into flame in air or oxygen, without being heated (that is why it is stored under water). A white solid, phosphorus pentoxide is formed.

Properties of Oxygen
Explain properties of oxygen
Physical properties
Chemical properties
Uses of Oxygen
Uses of Oxygen in Daily Life
List uses of oxygen in daily life
includes
Relationship between Some Uses of Oxygen to its Properties
Relate some uses of oxygen to its properties
There is relationship between uses of hydrogen and its properties. For example, oxygen is used as an aid to breathing in hospitals and at extreme altitudes because it supports life, and for combustion because it supports burning. Likewise, due to its highly reactive nature, oxygen is used for removal of impurities, welding, in the L-D process for making steel, and in burning of fuels in rockets.