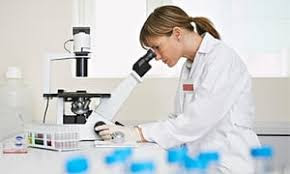 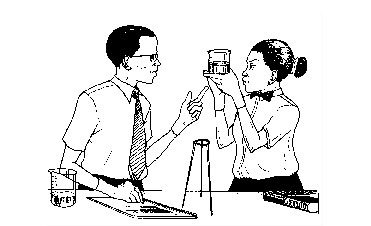 Students conducting an experiment
There are three types of variables. These are:
For example, you might be interested to carry out an experiment to determine the influence of the concentration of phosphorus fertilizer on maize growth. To get the best results, you grow maize in similar conditions of soil and atmospheric environment (controlled variable) but vary the quantity of fertilizer in each test (independent variable). Then you measure the height of maize plants (dependent valuable) after a certain interval of time as shown in figure below. The value of the height you will obtain will obviously depend on the amount (concentration) of the fertilizer applied. This is a typical fair test. However, most chemistry experiments do not involve fair tests.
Now, let us turn back to our experiment. In the example of determining whether the surface area increases the rate of evaporation or not, we can design an experiment to prove or disprove this phenomenon. This is conducted by filling a basin (with large surface area) and a bucket (with small surface area) with 10 litres of water each. Then the two containers are placed in open air for 3 days. Here, care must be taken to place both containers under similar environmental conditions. Containers must be of the same type, that is, both must be plastics, metals, etc. In addition, the water used must be obtained from the same source. 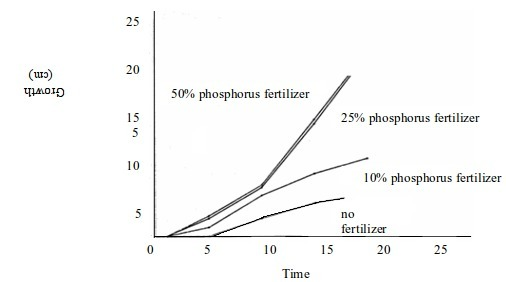 The effect of fertilizer on plant growth
The only variable to be kept constant is the volume of water, which is set to the volume of 10 litres. You should repeat your experiment several times to make sure that the first results were not just an accident.

Determination of the effect of surface area on the rate of evaporation of water
Observation and collection of data
Observation and recording of data must be done from the beginning to the end of the experiment. Data is the information gathered during the experiment. This can include descriptive (qualitative) and numerical (quantitative) data. Numerical data is that which can be measured, for example, 10 litres of water, 5g of copper, a five centimetre long ribbon of magnesium, etc. Qualitative data include information that cannot be measured, e.g. colour, shape or appearance, smell, feel, etc. Recording data is an important part of the scientific method because it helps scientists organize their ideas and observations. Charts, graphs, lists, diagrams, tables and even sketches are all the ways of recording data during experiments. Records appearing in the form of tables are easy to read, understand and interpret.
Continuing with our hypothetical experiment for determining the effect of surface area on the rate of evaporation, we expect that at the end of the experiment the volume of water in each container will have dropped to a certain extent.
We also expect that the volume of water lost from the basin will be bigger than that lost from the bucket. This means that more water will evaporate from the basin than from the bucket. Considering that scenario, we can then predict what the data can be like. Let us take this model as a real experiment and assume the kind of results that could be observed and collected during the experiment.
After 3 days of the experiment, water from each container was measured. The results obtained were summarized in the following table.
Source: hypothetical
Data collected from evaporation experiment after 3 days
Data analysis and interpretation
Once your experiment is complete and after you have collected data, you analyse your data to see if your hypothesis is true or false. In table 4.1, we find that, at the end of the experiment, 3 litres of water had evaporated off from the basin as compared to 1.5 litres from the bucket. What does this data tell us? What is it trying to reveal? This means that from the basin (with large surface area) water evaporated faster than that from the bucket (with small surface area). The data reveals the fact that surface area plays a major role in evaporation of water and many other liquid substances.
However, you may sometimes get unexpected results. You may find that your hypothesis was false. In such a case, you will construct a new hypothesis and start the entire process of the scientific method over again. Even if you find that your hypothesis was true, you may want to test it again in a new way.
Conclusion
The last stage (at this level of study) of the scientific method is to make inferences and draw a conclusion. Scientists look at the information they gathered and observed. Then they make connections to draw a conclusion. These conclusions may be or may not be in agreement with their predictions. Scientists make incorrect predictions all the time. An important part of the scientific process is to understand why predictions were incorrect. Many scientists will repeat an experiment several times to see if they can replicate the results before concluding. This ensures that they have conducted the experiment the same way each time and make sure no introduced errors or outside factors affected the experiment's outcome.
Based on data in a hypothetical experiment above, we found that 3.0 litres of water evaporated from the basin (a container with wide mouth and hence a large surface area). At the same time, 1.5 litres of water evaporated from a bucket (a container with a narrow mouth and hence a small surface area). From this result, of course, we can conclude that evaporation of water increases with increase in surface area of the container in which that water is kept. Therefore, our hypothesis is proved true and correct. Remember always to base your conclusion on the collected and analysed data, though it may deviate, to some extent, from the reality for one reason or another.
ADDITIONAL NOTES ON SCIENTIFIC PROCEDURE
In advanced study, the last step of the scientific method is to share what you have learned. Scientists share information so that others can use the findings to create different questions and conduct different experiments. Sharing information is an important part of working together. Professional scientists will publish their final reports in scientific journals, magazines, books, or even present their results at scientific conferences. For the purpose of study at this level, the last step is conclusion.
Even though we show the scientific procedure as a series of steps, keep in mind that new information or thinking might cause a scientist to back up and repeat steps at any point during the process. A process like the scientific method that involves such backing up and repeating is called an iterative process. Therefore, the scientific process is an iterative process.
Application of the scientific procedure
The scientific procedure is used in many areas and in different fields of study. It is especially applied by scientists and researchers to find solutions to various scientific problems. Below are some of the areas where the scientific procedure is applied:
The Scientific Procedure to Carry Out Investigations in Chemistry
Use the Scientific procedure to carry out investigations in chemistry
In this chapter, we have used two major examples to explain the concept of experimental procedure in detail. These are the rate of evaporation of water and exposure of anhydrous copper (II) sulphate powder to open air. For easy understanding and quick reference by students, the two examples are summarized below. Note that the test for the anhydrous copper (II) sulphate powder was not explained in full. However, the summary can give you a good picture on how to go about experimenting it.
A. The rate of evaporation of water
Steps
B. Exposure of anhydrous copper (II) sulphate powder to open air
Steps