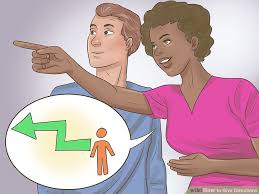 When you are locating places you have to use certain prepositions to locate them such as In front, Around, Behind, Close to, Adjacent to, The left hand, The right hand, Beside, North, Opposite to, South, Along, West, Across, at, in and on.

The prepositions at in and on can be confusing sometimes. The following is an explanation of how to use these prepositions. These are at, on and in.

AT is used to locate something at a certain point:

We were waiting at the bus stop when it started to rain. He was at the entrance of the theatre when he heard the noise.

IN is used to locate something enclosed in a space:

They found a lot of money in his pocket. I've lived in London for two years

ON is used to indicate position above and in contact with the surface of something.

The picture on the wall is fantastic. You'll find more information about the camp on this page.

For direction of important places we use words like, front, back, beside, adjacent, opposite, top.

Other words to use is the right and left hands the direct a person to go somewhere, for example; the second drawing is on the left hand of the fourth drawing.

FACTS FROM THE MEDIA

Identifying Factual Information from the Media

Analysing information from the media is the process of putting together information and being able to answer factual and non-factual questions.

Factual Information is usually brief. It gives indisputable answers to specific questions. No explanation or analysis is needed. Examples of sources for factual information are the encyclopedia, statistical compilations and almanacs.

It is expected that the BRT system will start by January 10, next year. The assurance came during a tour of the Permanent Secretary, Prime Minister’s Office, Regional Administration and Local Government, Jumanne Sagini to inspect the buses that will offer transportation services. Few days ago, Prime Minister, Kassim Majaliwa called for a speedy implementation of the project. “We wanted to satisfy ourselves if the buses are ready to offer the service,” Sagini who led other government officials told journalists.

UDA-RT Company owns the 140 brand new articulated buses that will be used in the BRT system. The buses will use top-notch Information and Technology (IT) system in fare collection, information, entertainments and other services. There will also be special areas for disabled and elders.

“The Prime Minister’s directives should be implemented as soon as possible,” Sagini told UDA-RT officials. The chairperson, UDA-RT, Robert Kisena urged citizens to take care of the buses once operations start. “Dar es Salaam dwellers and drivers of the buses will have to take care of the buses once we start operations,” he said. He noted that destroying the buses will be self defeating because the service is meant to facilitate transportation in the country’s commercial city. He noted that installation of gadgets to be used in the buses has started and was ongoing for the rest of the buses. The spokesperson of UDA-RT, Said Mabruk said all required buses needed in the interim service were already in the country and that it was his hope that the new transportation system will commence on time. The drivers who will operate the buses have already been trained.

Also, the project’s contractor is finalizing the infrastructure needed, especially bus stations and terminals, on time.The BRT project includes construction of 20.9 kilometre special trunk road froKimara terminal to Kivukoni area, Msimbazi road from Fire to Kariakoo-Gerezani area and a part of Kawawa Road from Magomeni to Morocco junction.It is anticipated that by 2025, Dar es Salaam will have 11.5 million citizens and this according to experts calls for serious infrastructure improvement. On-going phase one works of the project envisions reducing traffic jams and congestion at Dar es Salaam.

Exercise 1
According to the passage what are factual claims? Identify four of them.

NON-FACTUAL INFORMATION FROM THE MEDIA

Identify non-factual information from the media

According to the same passage above what are the non-factual claims? Identify three of them.

1. Where is the dinning hall?
The dinning is
- In the left of our class
- Adjacent to the boys’ dormitory
- Western side of the basket count
- Close to the water resource
- Beside the kitchen
- Opposite the boys dormitory

Where is the church?
The church is
- Is the eastern side of our class
- Is beside the school gate
- Is behind the car park
- Adjacent to the Goba road

An affirmative statement take a negative question tag
1. They are doing their home work. aren't they?
2. I am going now. aren't i?
3. John goes to school. doesn't he?
4. Children went home late yesterday. didn't they?
5. You should go soon. shouldn't you?

A negative statement take a positive question tag
1. She is not going to school. is she?
2. He won’t play tomorrow. will he?
3. Doctors did not demonstrate last week. Did they?
4. Will she come earl? She won’t?

If you ask a question in which you expect Yes answer they question tag will be negative
1. You like trouble don’t you?
2. You are a student aren’t you?
3. She studied had. didn’t she?
4. Will she come early?she won’t?

If you expect the answer no the question tag becomes positive
1. You are not Mruma?are you?
2. You are not soldiers. are you?
3. He is not a thief. is he?

We can change a story command into request form by addition of infirmity.
1. Shut up! will you?
2. Lets us move now, shall we?
3. Open the window, will you?
4. Comes here, will you/
5. Stand up, will you?

Suppose you have met a guest at Mwenge Bus stop tell him / her the way to go ST.Joseph Sec School
Go along the Bagamoyo
Turn left to kawe Road
Pass through NTUWEMA ST
Then on your left hand side to TANGANYIKA PACKERS