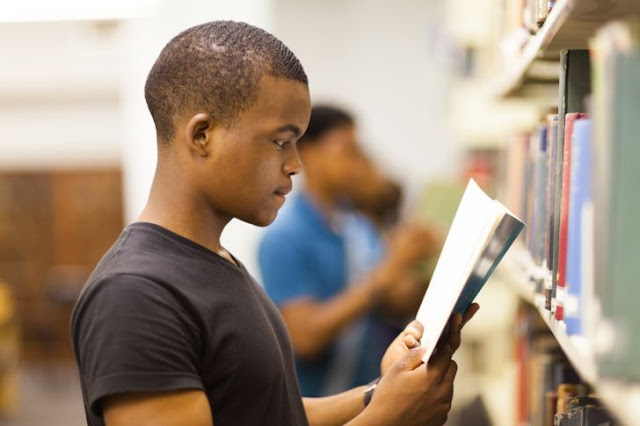 Literature cannot be isolated with the origin of man through labour process associated with the making and using tools. Human beings had to use language to communicate different issues related to labour differentiation. Primarily, literature was in oral forms such as songs (labour songs) myths, fork tales aimed at warning, encouraging hardworking, criticising evil, and maintaining social value or ethics.

Relationship between language and literature:

Literature and language are indistinguishable /inseparable because:
1. Literature is created through language. It is called so when language is used creatively to reflect human realities. Language is the medium or tool of communication in literature, no language, no literature .It can also be argued that language develops through the four language skills which are listening, speaking, writing and reading.

2. Therefore, literature as a work of art is different from other work of art such as pottery, sculpture, painting, carving, weaving, because it uses language creatively to describe or express human experiences and realities.

Written literature has three genres, these are:
- Novels and short stories
- Poetry
- Drama/play

Novel
This is a long narrative prose in which characters and actions represents real life and are portrayed in a complex plot. Examples of novel books are such as “Passed Like a Shadow” written by B. Mapalala, “Spared” written by S.N Ndunguru, Weep Not Child written by Ngugi Wa Thiong’o, “House boy” written by Ferdinand Oyono, “A Wreath for Father Mayer” written by S.N. Ndunguru.

Short Stories
This is a fiction prose narrative which is shorter than a normal novel and restricted in characterisation and situation. It normally deals with a single major event. Examples of short stories are from the book titled “Encounters from Africa” by Macmillan Ltd. The book contains two stories, which are; ‘The Voter’ and ‘The Smile of Fortune’.

Drama/Plays
Drama is a literary work written to be performed /acted by actors on a stage before an audience. The word “drama” means ‘to do’ or ‘to act’. It is a story which involves characters who acts before the audience which gets the message intended by the playwright. In order to be complete and effective drama needs actors or players, audience, language (diction), plot, setting, scenes, actions, etc.

Normally, plays belong to a different genre because they are border than other genre due to the economical use of woeds by tge playwright. Examples of play;‘ This Time Tomorrow’ written by Ngugi wa Thiong’o ‘An Enemy of the People written by Henrik Ibsen “The Black Hermit,” Kivuli Kinaishi and ‘The Lion and The Jewel’ by Wole Soyinka

Literature has two important elements which includes form and content.

This refers to how work or art is structured (how something is arranged or said). form includes plot, style/techniques, setting, characterisation, and language use (diction)

Style/ Technique
This refers to the way the work of art is made/composed. Style can be narrative where by an author accounts a story . It can also be part of the oral tradition which story is told in traditional styles such as a long a time ago……….., for many years ago……….. Style can also be straight forward where by events are narrated from what happened or takes place at the beginning to an end of the novel. We also have flashback techniques whereby an author may narrate events by moving back then forward through time. Example of a book in which the author employed a flashback technique is ‘Betrayal in the City ‘by Frances Imbuga.
Under technique style we also have a point of view, this refer to how events are observed. Depending on who sees the action and who tells the story. A story can be told from an omniscient point of view whereby the narrator is not known and has access to characters' thoughts feelings and all events. Third person point of view is used when the author describes his/her characters depending on what he sees, hears or thinks and the first person point of view uses 'I" and the author describes only what can be seen, heard or thought by a single character.

Setting
This refers to environment or the immediate world in which the events in a story takes place. It includes time, culture and place where events take place. Setting can be physical real or imagery setting. For example setting of this play ‘’ This Time Tomorrow’’ is Kenya after independence and the setting of a book 'Betrayal in the City' is the Kafira state in Africa hence imagery since we have no such state in Africa.

Characterisation
Is the description of characters in a story. Characterisation refers to the creation of an imaginary person to exist as a lifelike human for the readers. A good writer always strives to create believable characters. We know a character by examining what she/he thinks, says/does and what other character say about him or her life in general. Character can be main/major /central character; that appears mostly in every page of the book or narrative and plays a big role to the portrayal of the intended message by the author. Character can also be minor. These appear few times or very scarcely in a work of art. They assist the main character in accomplishing some message to the reader(s).

Language, diction
Refers to the choice and arrangement of words in a literary work .We examine whether the language used is simple , complex, mixed, grammatical, or ungrammatical , normal ,or figurative language.

Refers to the main subject of a literary work presented in a written or spoken form. It also refers to what is being conveyed in a speech, an article or a certain program. Content includes the following elements: Themes, message, conflicts, climax, crisis and philosophy.

Theme
This refers to the major idea or subject contained in a work of art. It is represented through persons, actions, or concepts in a literary work. It may also refer to the major topic obscured and reflected or describe in the book. In Africa literature the main themes are such as corruption, position and role of women, irresponsibility, betrayal and African traditional, belief, poverty. Other minor themes can be alienation, protest, oppression, and humiliation, sacrifice, class struggle.

Message
This refers to the lesson we get after reading a work of art. . Example; is the play ‘This Time Tomorrow’ we learn that, unity and solidarity is important for the liberation of the oppressed and humiliated society.

Climax
This is a stage in which conflict reaches the higher point where resolution is inevitable or necessary.

Crisis
This is a point where conflict rises and causes some problems to the person or people involved and therefore, resolution is necessary. There may be different crisis each proceed the climax.

Philosophy
Refers to the belief or outlook of the author which he/she expresses in the a book/story.

Literature is not written in a vacuum, it emanates from a society to reflect its social, political, economic, as well as cultural aspects. Therefore, literature has a direct connection to human life and thus, it can not be separated from human beings.

The following are some of the important roles and functions of literature:

1. Literature criticises societies, the authors of a literary work criticise society by revealing corruption, oppression, and humiliation, and inequality.

2. Literature expresses people’s culture. This includes norms, values, traditional, and, practices so that people can follow them. It can also makes people abandon some bad cultural practiced such as female genital mutilation (FGM) for positive changes.

3. Literature educates people: it educates people about day to day happenings or events in their society. It widens their mind and thinking capacity.

4. Literature entertains people; people enjoy by watching and reading different works which appeal to their state of mind.

5. Literature is a tool of liberation. It makes people know the presence of exploitation, irresponsibility, it direct people to struggle for mental and physical liberation against these problems.

6. Literature develops language because language is a tool or medium of communication in literature.

Poetry is a genre of literature which expresses the feelings, ideas, and emotions of the reader(s) or hearer(s). The language used in poetry is characterised by imagery and rhythmical sounds.

Poem: This is a piece of writing in a verse form which expresses the deep feelings using artistic language.

Persona: This refers to a character in a poem.

Poet/poetess: This refer to a man or woman who composes an oral or written poem.

Verse: This is a simple line in a poem.

Stanza: Is a combination or collection of verses to make a complete idea of a poem.

The genre of poetry differs from other genres of literature like prose in the following aspects:

1. Poetry uses much imagery which appeals to the sense of touch, hearing, small and taste in a more concentrated way than prose.

2. Poetry is arranged in verse which forms stanzas to make a poem as whole while prose is written in sentences and paragraphs.

3. Poetry employs the use of much musical features such as rhyme and rhythm unlike to novels and Short stories which words are intended to be read silently not loud or sung or recited.

4. Poetry employs language economy. Few words convey such information. This is because even single word in poetry may hear a number of messages.

5. Poetry uses many figures of speech such as simile metaphor personification etc. than other Prose.

6. The character in a poem is called persona but in novel and play are character does not posses a name.

To read the analysis of Novels, Plays and Poems, click here