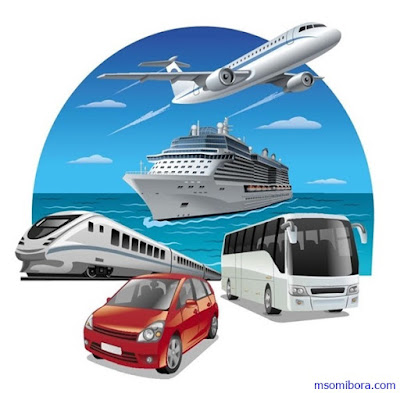 - Transport is the movement of people or goods from one place to another.

- Transport is a system or means of conveying people or goods from place to place.

- Transport is the movement of humans, animals and goods from one location to another.

- Transport enables trade between people, which is essential for the development of civilizations.

- Transport means to move something from one place to another.

- Transport is to carry, move, or convey from one place to another.

-Transport is a system or means of conveying people or goods from place to place.

In other words, the action of transport is defined as a particular movement of an organism or thing from a point A (a place in space) to a point B. Modes of transport include air, land (rail and road), water, cable, pipeline and space. The field can be divided into infrastructure, vehicles and operations.

- Communication is a process by which information is exchanged between individuals through a common system of symbols, signs, or behaviour

- Communication is the imparting or exchanging of information by speaking, writing, or using some other medium.

- Communication means of sending or receiving information, such as telephone lines or computers.

- Communication is the act or process of using words, sounds, signs, or behaviors to express or exchange information or to express your ideas, thoughts, feelings, etc., to someone else.

- Communication is the act of conveying meanings from one entity or group to another through the use of mutually understood signs, symbols, and semiotic rules.

- Communication is simply the act of transferring information from one place, person or group to another.Every communication involves (at least) one sender, a message and a recipient.

Transport and communication are a way for us humans to overcome the barrier of physical distance. They are important infrastructures for the overall economic development of a country.

Types or modes of transport refer to the means by which people, goods, animals or services are moved from one location to another.

There are three broad modes of transport. These include:
1. Land Transport
2. Air Transport
3. Water Transport

Human transport or human Portage is the transport of people and or goods using human muscle power, in the form of walking, and running from one place to another.


Advantages of human transport
1. It is readily available all the time.
2. It is cheap and affordable than any other form of transport.
3. It is Safe than other means of transport
4. It is not affected by congestion.
5. Human transport does not pollute the environment

Disadvantages of Human Transport
1. It depends on the physical fitness of the person.
2. It is extremely slow and laborious.
3. This transport is only suitable for carrying light goods over short distances.

Road transport is most common on land and reaches even the most remote areas. It involved the use of various vehicles such as motor cars, buses, trucks, motorcycles, bicycles, carts etc. It is one of the most important means of transport and is crucial to the development of commerce and industry. All the movement of goods begins and ultimately ends by making use of roads.

1. Road transport requires much less capital investment as compared to other modes of transport such as railways and air transport.

2. It involves different types of vehicles and hence gives the person a wide freedom to choose the kind of transport to use.

3. Road transport is most suited for carrying goods and people to and from rural areas which are not served by rail, water or air transport.

4. It is more economic and quicker for carrying goods and people over short distances.

7. Road transport is a feeder to other modes of transport. The railways, ships and airways. Goods are normally transported to and from airports, ports, or railway stations by road.

8. Roads can be constructed, developed or maintained while they continue to be used.
Disadvantages of road transport

The following are some of these Limitations of Road Transport

1. Motor transport is not as reliable as railway transport during rainy season
2. There are more chances of accidents.

3. It is unsuitable and costly for transporting heavy and bulky goods over long distances.

4. The speed of motor transport is comparatively slow and limited compared to air transport.

5. Goods transported by road face the risk of being stolen by robbers while on transit.
6. Motor vehicles emit gases which contribute to air pollution and noise pollution.

7. Road transport face the problem of congestion (traffic jam)
8. The road transport is comparatively less organized. More often, it is irregular and unreliable. The rates charged for transportation are also variable and unequal.

This is a means of transport that helps people, goods or services to move from one place to another via rails and trains. In Tanzania we have the central line, formerly known as Tanganyika Railway, is the most important railway line in Tanzania. It runs west from Dar es Salaam to Kigoma on Lake Tanganyika via Dodoma. The TAZARA Railway, also known as the Uhuru Railway. Railway, links the port of Dar es Salaam in Tanzania with the town of Kapiri Mposhi in Zambia’s Central Province.

1. It is least affected by weather conditions such as rain, fog, etc.

2. The railway transport is better organised than any other form of transport. It has fixed routes and schedules.

3. Its speed over long distances is more than any other mode of transport, except airways.

5. It is a cheaper mode of transport as compared to other modes of transport.
6. Railway is the safety form of transport, there is low occurrence of accident.

7. The carrying capacity of the railways is extremely large.
8. It is not affected by the problem of congestion as is the case with road transport.

9. Trains making long distance travel quite comfortable as it have such facilities as cafes, bathrooms and sleeping space

1. The railway requires a large investment of capital and it takes a long time to construct.

2. Railway transport is inflexibility. Its routes and timings cannot be adjusted to individual requirements.

3. It involves much time and labour in booking and delivery of goods through railways as compared to road transport.

4. It is not suitable for transportation of perishable goods like milk, vegetables and meat as they can easily go bad while on transit

5. Railway transport is not economical for transporting people or few light goods over short distances.

6. Railway transport cannot benefit the rural people as there are very few or no railway stations to serve these areas.

Pipeline transport is the transportation of Liquid and gases goods through a pipe. Example The Tanzania Zambia Mafuta (TAZAMA) pipeline which runs from the port of Dar es Salaam in Tanzania to Ndola in Zambia, covering 1710 km, and the local Songogas pipeline from Songosongo to Dar es salaam.

1. It is not associated with environmental pollution.
2. Its flexible transport as it can pass through difficult terrains as well as under water.

3. It is not affected by congestion as is the case with road transport.
4. It needs very little maintenance.

5. Is not affected by adverse weather events such as floods, heavy rains, fog, etc.
6. Accidents and theft are greatly reduced compared to other form of transport.

1. Environmental pollution can occur if the pipeline leakages is not well maintained and repaired timely.

3. Underground pipelines cannot be easily repaired and detection of leakage is also difficult.

4. Pipelines are expensive and they take a long time and intensive labour to build.
5. They have fixed carrying capacities which cannot be exceeded

6. Pipelines conveying flammable or explosive material, such as natural gas or oil, pose special safety concerns and there have been various accidents.

1. It is the fastest mode of transport and most suitable mean where time is an important factor.

2. Travelling by air is comfortable especially over long distances.

3. Air transport is not affected by physical barriers such as mountains, forests, rivers, etc.
4. It is flexible since the routes and planes can be swapped when need arises.
5. The transport is scheduled, so there is no time wasting

6. It does not require huge capital investment in the construction and maintenance of surface track.

7. Air transport can be used to carry goods and people to the areas which are not accessible by other means of transport.

8. Air transport plays a very important role in the defence of a country. Modern wars have been fought mainly by aeroplanes.

1. Air transport is controlled to a great extent by weather conditions. When storms, fog, mist, snow, heavy rain or any signs of unfavourable weather conditions are detected, take off of planes is delayed, routes changed or flights cancelled.

2. In case of accidents there is very little chance of survival.
3. Air transport is unsuitable for carrying cheap, bulky and heavy goods.

4. It requires a large amount of capital investment in the construction and maintenance of aeroplanes.

5. Training of the personnel in the aviation sector is a very expensive.

6. It is relatively inflexible as it only serves places that have airports and airstrips. except helicopter which can land in various areas.

7. Insecurity problems are also experienced in air transport. There are cases of hijacking and terrorist attacks.

Coastal shipping. This is one of the most important means of transport for carrying goods from one part to another in a country. It is a cheaper and quicker mode of transport and is most suitable for carrying heavy, bulky and cheap cargo like coal, iron ore, etc. to distant places. However, it can serve only limited areas.

1. Water is a natural route which does not require any cost of construction and maintenance.

2. It is the most suitable means of transporting larger quantities of heavy and bulky goods such as coal, machinery, hardware and timber over long distances.

3. There is minimal congestion in water transport compared to road transport
4. There are minimal risks of accidents and breakdowns

5. It is suitable for transportation of fragile or breakable goods, such as glass, since there is very limited shaking and jolting on the waterways.

6. Water navigation facilities do not need frequent repairs and maintenance

2. Rivers and canals cannot be operated for transportation throughout the year because of climatic change.

3. Modern shipping vessels are very expensive. Port construction, as well as purchase of loading and unloading machinery is also expensive.

4. Water transport system cannot be constructed anywhere. It can only be done in a limited area which is served by water bodies.

5. There is sometimes a problem of strong winds and storms, which greatly interfere with the shipping schedule.

6. Some water bodies are infested with dangerous animals such as hippopotamuses. 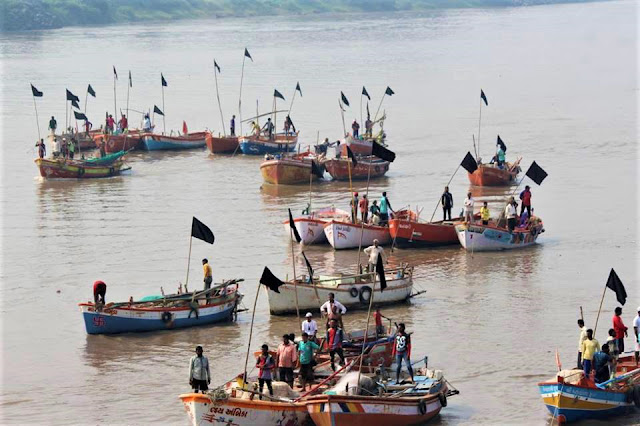 The Importance of Transport in Tanzania and East Africa

1. It is Source of employment
2. Promotes trade and commerce:

Measures Taken to Address the Problems of Transport Industry in Tanzania

1. Formulation of policies and laws that promote the development of the transport industry.

2. Punishment to government officials involved in corruption scandals pertaining to embezzlement of funds allocated for construction of transport

3. The East African countries should build railway lines with the same gauges and trucks so as to ensure connectivity with all countries in the region.

4. The country should put more efforts on collection of revenue and seek assistance from donors to assist in infrastructure construction.

6. Keeping sufficient oil reserves in order to stay self with the effect of oil fluctuation

7. The advancement of science and technology