HISTORY: FORM ONE: TOPIC 2 - EVOLUTION OF MAN, TECHNOLOGY AND ENVIRONMENT

- Evolution is gradual process in which something changes into a different and usually more complex or better form.

- Evolution is the process by which an organism becomes more sophisticated over time and in response to its environment.

- Evolution is the change in the characteristics of a species over several generations and relies on the process of natural selection.

- Evolution is change in the heritable characteristics of biological populations over successive generations.These characteristics are the expressions of genes that are passed on from parent to offspring during reproduction. Different characteristics tend to exist within any given population as a result of mutation, genetic recombination and other sources of genetic variation

One of the earliest defining human traits, bipedalism, the ability to walk on two legs evolved over 4 million years ago. Other important human characteristics such as a large and complex brain, the ability to make and use tools, and the capacity for language developed more recently. Many advanced traits including complex symbolic expression, art, and elaborate cultural diversity emerged mainly during the past 100,000 years.

1. THEORY OF CREATION
Such theory explains that there is super natural power that creates everything. This super natural power is God. Refer from the Holy Bible and Qur'an e.g from Biblical knowledge, (Genesis chapter 1:26) it says that:- God created man by using soil, at first they created a man and then later a woman. These two creatures established their relationship and this marked the beginning of human family.

2. THE THEORY OF EVOLUTION OF MAN
The story of human evolution began in Africa about six million years ago and it describes the very long process that our ancestors went through to ultimately become modern humans. This process has been uncovered by studying fossils and understanding the underlying theory of evolution, and while new fossils are uncovered every decade revealing new chapters, scientists agree about the basic story.

The theory of evolution of man was proposed by an English man known as Charles Darwin (1809 -  1882). The theory says that: - man’s species has been changing gradually from lower stage to better stage due to environment. Changing goes hand in hand with improvement of methods of obtaining food, cloth and shelter.The gradual change of man is called evolution.

The theory of evolution tries to explain the origin of man by describing the changes that our ancestors underwent until they were like modern man. The first man belong to the family of primates which included Ape, Gorilla, Monkey and Chimpanzee. These animals lived in the forest walking on four limbs and their bodies covered with hair. Because of environmental changes and diminishing of forests, they started to live in open grassland. The environment forced them to adopt new way of walking by using two limbs known as Bipedalism.

1. MODERN APES
This is the first stage of man's evolution, it is sometimes called primates. It included  Gorilla, Monkey, and Chimpanzee.
Characteristics
- Their bodies were covered with lots of hair.
- They walked on four limbs
- They lived in dense forest.
- They had poorly mental abilities.
- They totally depended on nature eg. ate raw food


2. AUSTRALOPITHECUS AFRICAN FAMILY
This stage started about 12million years ago (B.C) when primates changed to near man. This stage divided into two
a) Zinjanthropus
b) Homo habilis

Homo Habilis
- It lived between 1,500,000 and 750,000 BC.
- Homohabilis become more skillful man, because was systematic tools maker.
- Homohabilis believed to be the direct ancestor of modern man.
- He had bigger brain and he was more systematic tool maker.
- The skull of those creatures were discovered at Olduvai Gorge and omo in Eastern and Rudolf in Kenya. 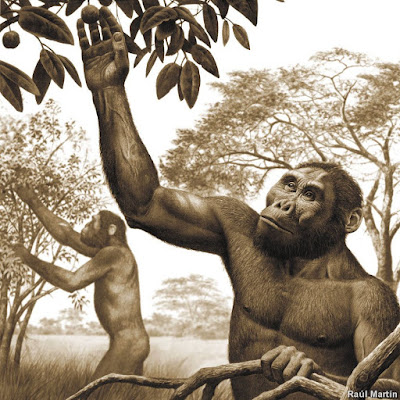 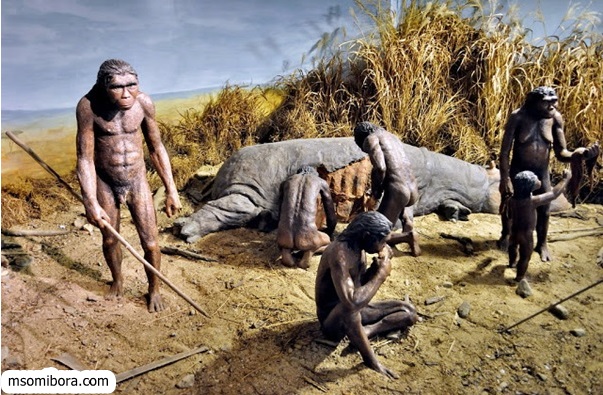 3. HOMO ERECTUS
Characteristics
- Man was fully moving upright.
- He become more skillful tools maker than Homohabilis.
- It's fossils have been dug up in Olorgesaille and near Lake Turkana in the Kenya, Olduvai gorge in Tanzania. 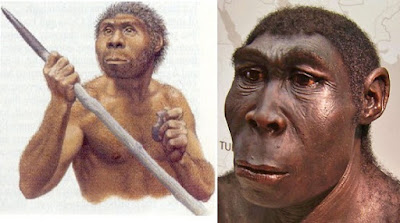 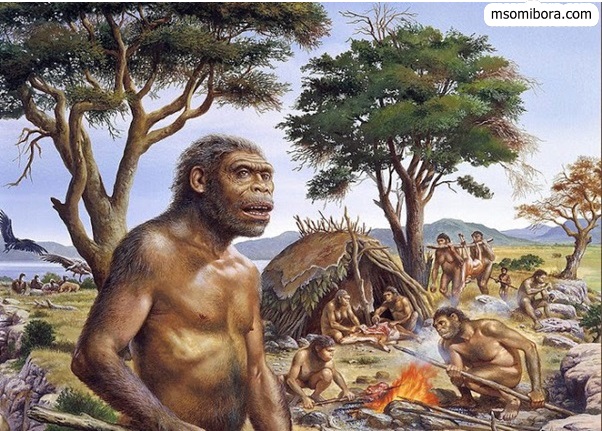 4. HOMO SAPIENS
Characteristics
- He is a true man of today
- Has a large brain in size
- Has less thick jaws
- He was highly skillful man
- He made tools by using stones and bones. 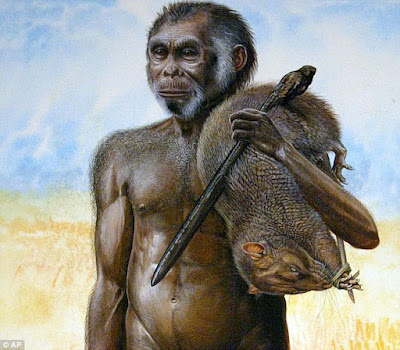 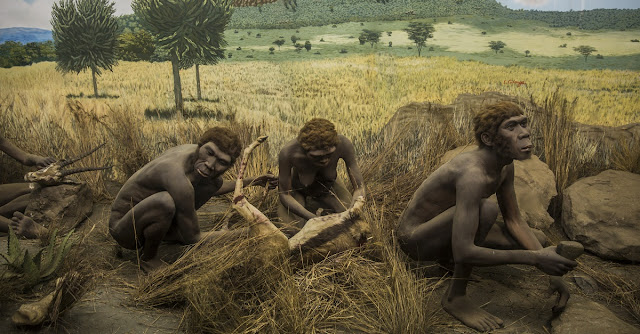 NB: the theory of evolution has been supported by Archaeologist Dr. Leakey in Olduvai Gorge in 1959

STONE  AGE
Stone age: This is historical period in which man made and used stone tools. Is a period based on man's economic activities and type of the tools used . eg, Stone age, Iron age, Science technology age etc.

This is the first period of stone age. It existed between 1,750,000 B.C and 750,000 B.C. Zinjanthropus- was the only man existed in this period. The early stone tools were pebbles, chopping, hammer stone, hand axe etc.

Man used these tool for
- killing and skinning animal flesh
- Digging up roots
- Cutting tree branches
- For defense
Man obtained his food by hunting and gathering
In this period man had low ability to control his environment.

This stage covered the period between 750,000BC to 50,000 BC.
This period man improved his stone tools.
Tools were -smaller, sharper and easier to handle.
Tools were spear, Arrows, Needles, Stone picks, Knives, projectile point and bone awls.

These tools were used for
- Digging up roots.
- Killing and skinning animals.
- Cuttings & chopping


THE DISCOVERY OF FIRE

Fire was discovered by man who was scratching pieces of wood using his hands. The more he continued scratching, the pieces of wood got heat the smoke come out, the scratch caused friction of scratched wood and led to emission of fire.

Importance of Fire to Man

Man started permanent settlement. The tools were still largely made of stone but they were far better than those of earlier periods. This period marked the beginning of settled communities. In areas such as Kondoa Irangi, paintings and drawings in the carves proved this fact. The paintings and drawings show the shape of tools used and animal hunted.

Characteristics of the Late Stone Age

1. Man used better tools compare to the previous ages.
2. Man started to domesticated plant and animal.
3. Man become food producer.
4. Increase of population.
5. It was beginning of settled communities and villages.
6. This period marked to be primarily on division of labour.
Example: women become child bearers and cares while man for protecting the families and hunting Informal education started in this period.


IRON  AGE
Iron age is believed to have started during the first millennium A.D. This was the period when man made and used Iron tools. The discovery and use of iron improved man’s standard of living. Iron tools were discovered about 3000 years ago. The first people to make and use iron tools in Africa were the people of Ethiopia and Egypt. Iron skills and knowledge were not uniform or the same in Africa.

The first important towns for iron smelting were:
Meroe in Sudan
Axum in Ethiopia
Nok area in West Africa

The Result of Using Iron Tools

1. It led to increase in food production. Man could now clear his areas for cultivation.
2. Increase in population due to more food.
3. There was emergence of specialization i.e. Iron workers (black smiths) and food producers.
4. It led to the emergence of complex villages / development of political organization as kingdom and states.
5. Tools were highly improved and more efficient