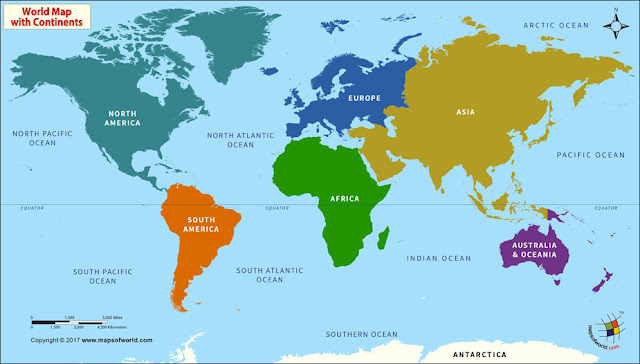 - A map is a symbolic representation of selected characteristics of a place, usually drawn on a flat surface.

- A map is a drawing of a particular area such as a city, a country, or a continent, showing its main features as they would appear if you looked at them from above.

- A map is a visual representation of an entire area or a part of an area, typically represented on a flat surface.

- A map is a symbolic depiction emphasizing relationships between elements of some space, such as objects, regions, or themes.

- Map is a representation of an area of the earth’s surface on a flat surface such as paper, wood, board, card, plastic, cloth or some other material.

Map reading is the process of examining the given topographical map, conventional symbols and signs

Map interpretation is the process of examining a given topographical map of an area represented for the purpose of identifying the geographical information of an area.

Map Work is the study and analysis of maps, especially prior to, or in relation to fieldwork

The work of a map is to illustrate specific and detailed features of a particular area, most frequently used to illustrate geography. Maps attempt to represent various things, like political boundaries, physical features, roads, topography, population, climates, natural resources and economic activities.

Cartography is the study and practice of making maps.

Cartographer a person who draws or produces maps.

The classification of maps is based on the purpose for which each map is drawn. Therefore map can be categorized into three types as follows:
1. Sketch map
2. Atlas map/ wall maps
3. Topographical maps

1. Sketch Maps; A map drawn from observation (rather than from exact measurements) and representing the main features of an area.

2. Atlas Map / wall map; A collection of different maps that have been bound together in one volume to form a book. These maps are usually drawn to scales example shows town and cities, hills, mountains, valleys, forests, countries, etc.

3. Topographical Maps; Shows selected physical and human features in an area and their positions on the ground for example hills, village, mountains, lakes, ponds, rivers


COMPONENTS / ESSENTIALS OF A GOOD MAP

1. Key. This is a list of symbols and signs with their meanings as used in the map. It appears in a box at one of the bottom comers of the map. When these symbols and signs are given in the key, it becomes easier to interpret a map and get accurate information from it.

2. Title; This shows the topic or subject matter of the map. It gives the name of the area which the map represents or the features represented on that map. The name of the map enables the user to read and interpret the map easily.

3. North direction; This is an indication of the north direction. It shows where north is and by knowing north one can know the direction and bearing of the place.

4. Margin; This is a boundary or limit around the map. It gives or shows the reader and interpreter the end of the map.

5. Scale; It shows the relationship between map distance and the actual ground distance for example 1cm to 10km means one centimeter on the map represents ten kilometers on the ground

6. Latitude and Longitude / Grid Reference. It used to locate the place on the map. For example the map of Tanzania is located at latitude 6°00' south of the equator and longitude 35°00' east of Greenwich meridian.

6. Publisher and date publication; This shows when the map was produced and a publisher.

Types of Scale
We can classify the scale according to the size in our criteria. There are three types of scales;

a) Large Scale
They are used to present information on small areas for example a map of village buildings and farms. The map size involves all numbers less than 1:25000 i.e. 1:10000 and 1:5000
Characteristics of large scale.
1. It has smaller numbers in the denominator.
2. It shows features clearly
3. It contains geographical details.

c) Small Scale
They are used to present information that is long. This type of scale covers a big area with less detail. For example a map of a country, continent or world. May involve numbers between 1 : 500,000 to 1 :1000,000
Characteristics of small scale
1. It has the largest denominator.
2. Contains a lot of geographical information.
3. It does not show geographical features clearly.

1. Statement Scale.
Refers to the scale which is expressed in terms of words or explanation. For example one centimeter on a map is equivalent to 10 centimeters on the ground.

Measurement of Distances on Maps
Distance is the length of elongated features on the earth’s surface such as road, railway, river etc. How to measure distance. In order to obtain distance of any feature on the map, consideration should be made on whether the distance to be measured is straight or curved. Straight distance For all straight distances a ruler is used to obtain the distance directly from the topographical map given. Curved distance. It becomes difficult to obtain curved distance of the features by the use of a ruler directly from the topographical map when the area is inclined. 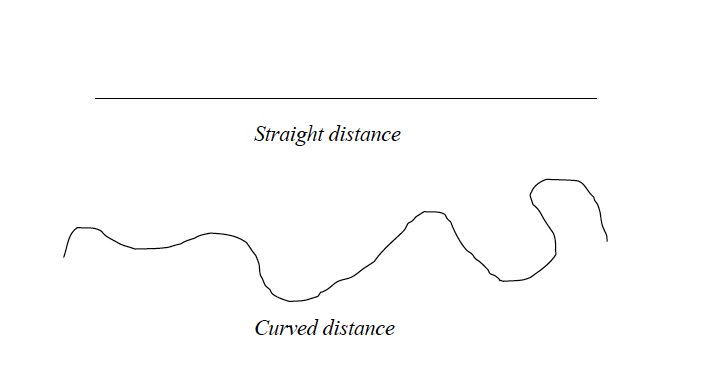 Tools for measuring distances
There are three main tools that are used for measuring distances on maps. These are:
Measurement of distance using a thread or string
A long, thin string such as sewing thread can be used to measure a stretch of many curves or bends. This is the commonest method used by geography students to estimate distances on maps. This method is also used to estimate straight distances.
Procedures 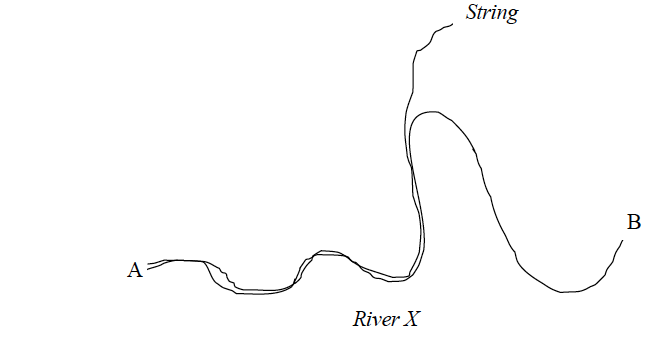 Areas of Regular and Irregular Figures 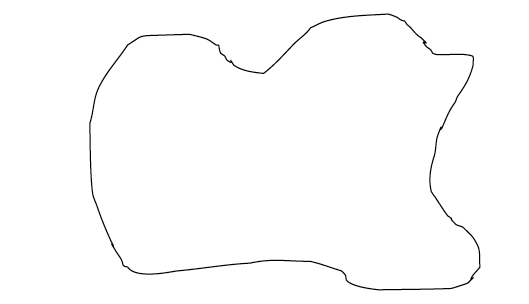 An irregular shape
There are three methods used to calculate areas of irregular shapes. These are the:
Division method
In this method, the area to be measured is divided into rectangles or squares and triangles or into several strips of the same length and width. Then, the area of each resulting figure is calculated using mathematical formula and summed up to get the total area. 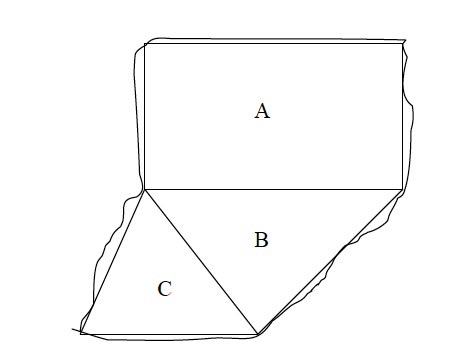 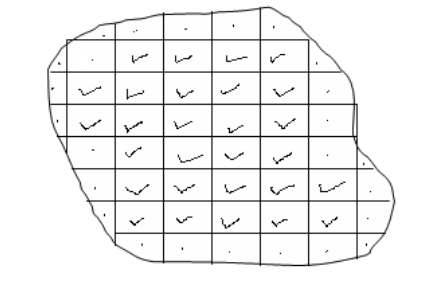 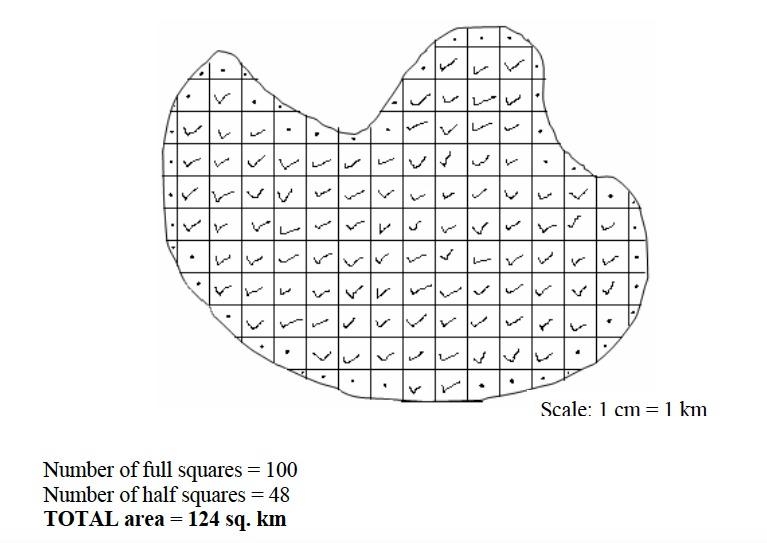 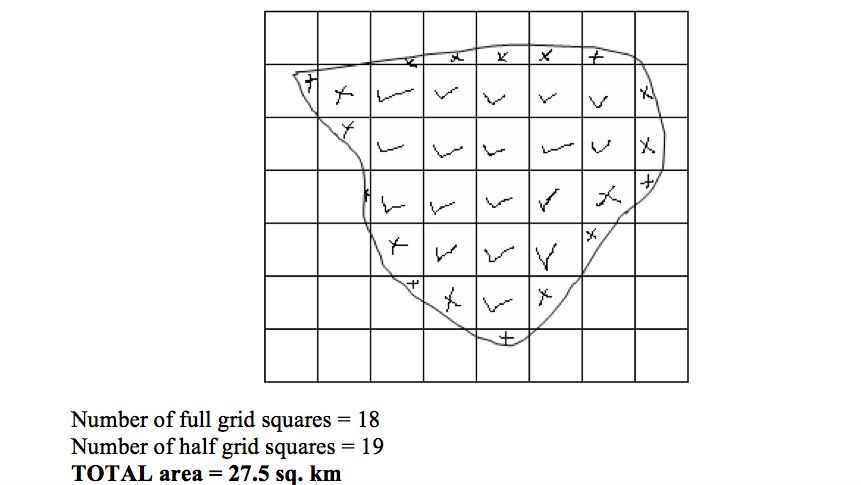 The procedures for calculating the area of a figure on a map with grid squares are similar to those used in the tracing method discussed previously in this chapter.

In map reading, position is a place where an object is situated on the earth’s surface. The geographic position of a place may be shown by using:
Use of place names
Names of places on maps may be used to locate the position of an area or place. Names of places e.g. Morogoro, Tarime, Mbeya, etc are clearly marked and shown on maps.
Compass bearing
Many years ago it was discovered that a magnetized piece of iron or needle, if hung or allowed to swing freely, will always point to the same direction. This direction is called the North. It is from the north direction that we measure other directions, that is, East, West and South.
A compass is an instrument used to measure directions from the north. It consists of a free-swinging, magnetized needle which points to the north and south magnetic poles. 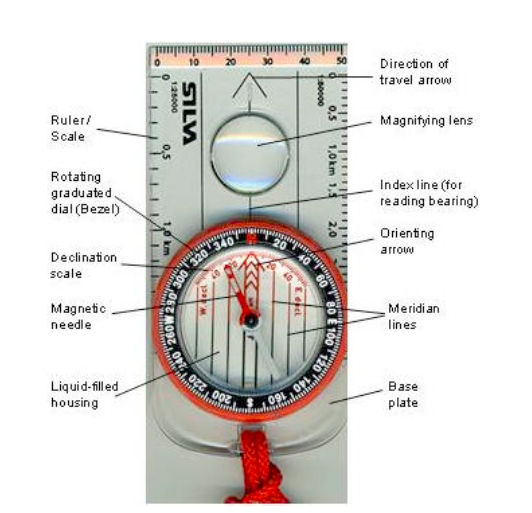 A compass
The compass can be used to show directions in the following ways:
North direction
The north direction may be shown by using; Geographic or True North; Magnetic North and Grid Nortn. 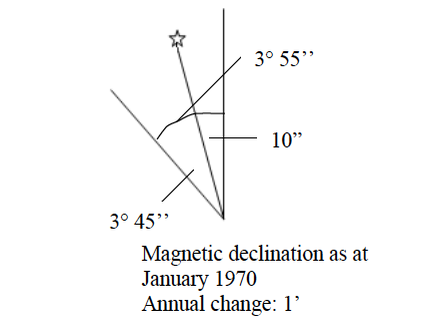 Compass directions
There are four major directions, bearings or cardinal points on maps with respect to a fixed point, be it true North or magnetic North. They are marked by 90º. 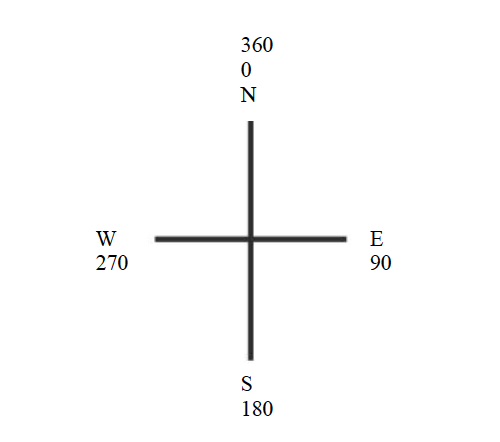 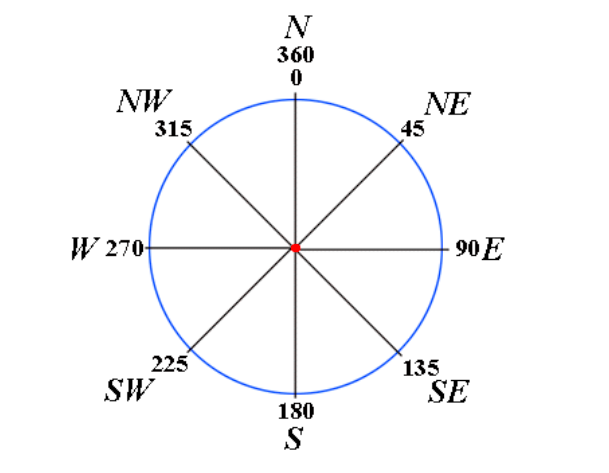 The eight points of a compass can further be sub-divided into sixteen points of 22.5º 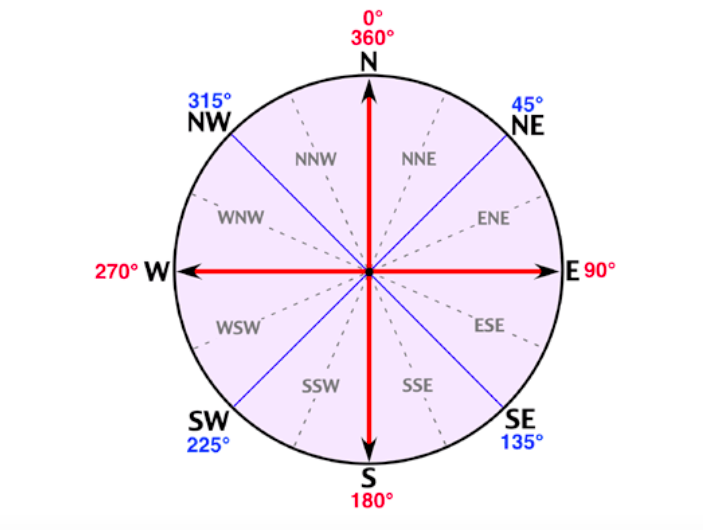 Bearings of a compass
Compass bearing shows the direction of a point with respect to another point measured clockwise from 0o to 360o. Bearing is expressed in degrees which are further sub-divided into minutes and seconds. 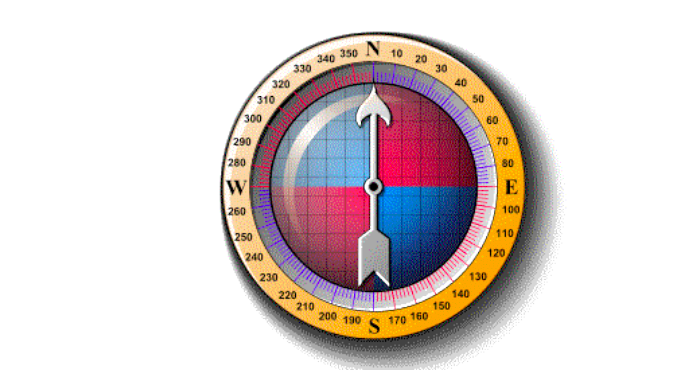 Bearings of a compass
Grid reference
A grid system is a pattern of horizontal and vertical lines forming squares of uniform sizes drawn on a map. Grid system is numbered East and North and is referred in terms of Easting and Northing. 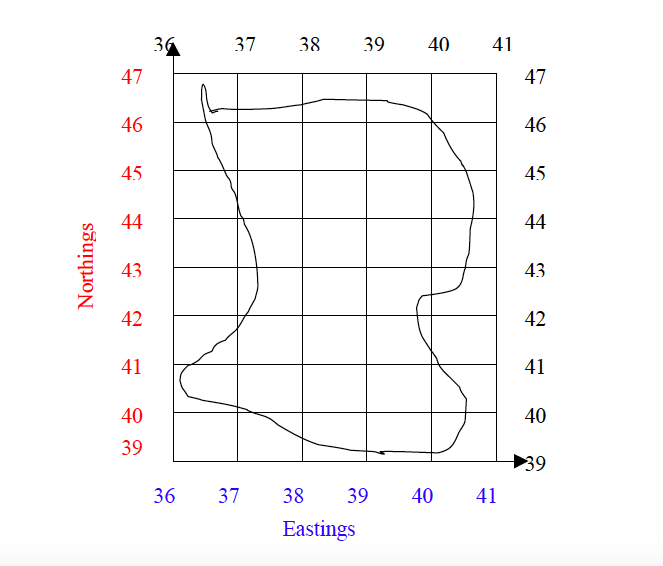 Grid lines are not lines of latitude and longitude, but are drawn to a definite distance apart, which varies according to the scale of the map and unit of measurement used in a map. The reading in a grid system is referred to as grid reference and is given in a six-figure number.
Using grid reference
Procedures

Direction and Bearing of Object on Maps

The bearing of a lace on a map can be found when the north is given. The North is usually an arrow sign pointing to the north.
Example 5
Find the bearing of point B from point A.
Procedures 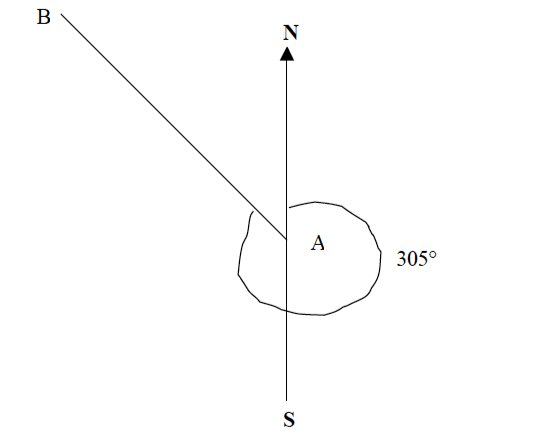 When finding angular bearing or direction of a compass, always use the “True North” which is given on the map.

The following are major methods used to show positions of a place on a map.
1. Grid reference
2. Place name
3. Bearing and compass direction.
4. Latitude and longitude.

2. Place Name. You can locate the position of a place by where the features are found i.e. Kigoma, Mbeya, Dodoma, Lindi etc.

3. Compass Bearing and Direction
How to find direction of a place on map. Identify them due to points on the given map. Points may be given by using grid reference points, place name or letter. Draw a straight line connecting the two points Mark the major four cardinal points at the starting point with the word from.

How to Find Bearing on the Map
1. Identify the grid reference points given on the maps.
2. Draw a straight line connecting the two points
3. Draw the major four cardinal lines at the starting
4. Use a protector to measure degree clockwise from north up to the line joining the two points.
5. Then Provide your answer in degrees

a) Forward Bearing Is a bearing into a subject.
Procedures to calculate forward bearing
1. Identify the two points.
2. Join them with a straight lines
3. Draw north direction on a second point.
4. Measure the angle by using a protector.
5. State the bearing in terms of degrees of the direction.

Importance of the Use of Maps

1. People use them to reach their directions
2. Maps are used to describe the features of the earth

7. Maps are used to record and store information about the environment, the location of natural resources, capital assets and people. This is because the features change while map information does not change. As such, maps store information for future reference.