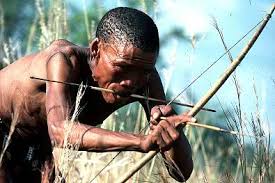 Social organization is the way individuals within a group relate in order to exist harmoniously. This entails the recognition of the role played by each member of the society and how that role fits in with other people’s roles to meet the needs of the entire society. For example, in the pre-colonial agricultural societies, the blacksmiths made iron tools. Farmers used those tools to prepare land and rainmakers prayed for the rain to make the crops. All these people contributed to the production of food for the society.

Or, Social organization can be defined as the mode of production existing in a given place at a given period of time. Modes of production involve productive forces that are human labour, instrument of labour, economic activities and objects of labour and production.

Production is the process by which people create goods to satisfy their needs and to accumulate surplus for times of need. Production could invonlve manufacturing, mining, crop cultivation or animal husbandry. 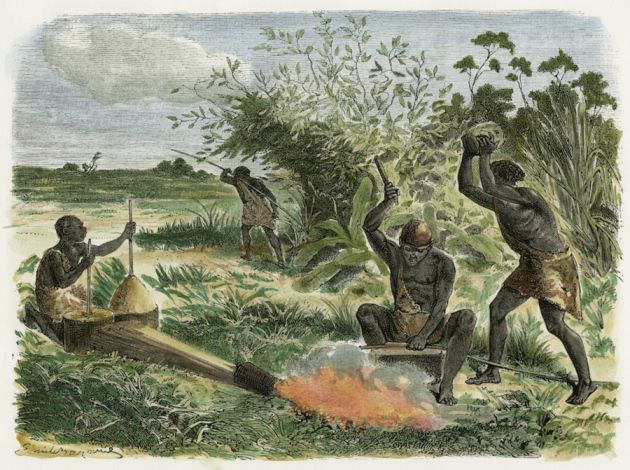 Refers to the varied ways that human being collectively produce the means of subsistence in order to survive and enhance social being. Therefore in this topic we shall fully analyze characteristics of various mode of production in the pre colonial African societies. The followings are the modes of production existed in the pre colonial African societies:

A: COMMUNALISM MODE OF PRODUCTION

This was the first mode of production to exist in pre colonial African societies and is divided into two namely:

2. Advanced communalism
During that era man advanced in his tools through various discoveries like iron tools. It is because of this technological advancement that is why it came to be known as advancement communalism. The nonproductive members of the society such as the elders, disabled and children were exempted from work due to their disabilities.  The invention of agricultural tools encouraged man to cultivate bigger plots of land.  Rapid increases in population also encouraged people to increase their farms so as to get more food which could feed the growing population.

Some of African societies in the present days are still practicing communal mode of production. These include;
The Tindiga and Hadzabe of Singida and Lake Manyara and Central Tanzania.
The Dorobo (Okiek) of Maumau forest and Tesoin Uganda.
The Mbali found in the equatorial rain forest of the Congo DRC.
The bushman (san) of South Africa.
The KhoiKhoi of Kalahari desert of Botswana
The Tur of Ghana. 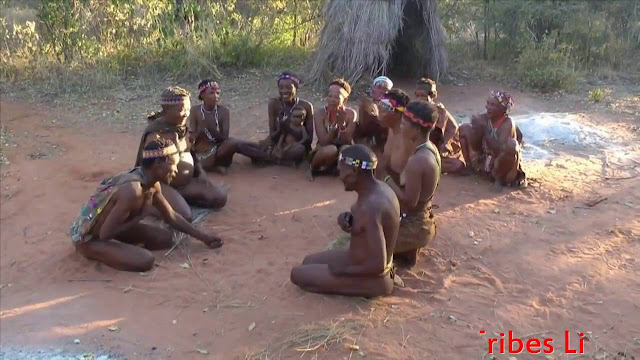 1. Absence of exploitation. There was no exploitation among the people in a community. All the able bodied members of the  society worked hard and shared what they produced.

3. Dependence on nature. In communalism life was entirely dependent on nature therefore the environment dictated how man lived.

4. Communal ownership. The communal ownership of properties was a major characteristic of communalism. The major means of production like land, tools and minerals were owned by the community.

5. Hunting and gathering. This was the main occupation in these communities; people were grouped together in collective groups known as hunting bands to facilitate this means of production. This later led to the  development of stock raising and agriculture then it brought the division of labor.

6. Subsistence economy. Due to low level of development of science and technology people produced enough food for their consumption.

7. Lack of specialization. Because of limitation of their science and technology (knowledge) these people learnt to perform all types of jobs. They worked together in marking roots, hunting and looking for food later on very simples division of labor based on gender occurred.

8. People in communal society treated each other equally. There was no standing armies and ruling classes; even elders were not lords or rulers.


Factors for Transition from Primitive Communalism to Slavery and Feudal Mode of Production.

2. Advanced in science and technology. This was the turning point that gave improvement in agricultural production. The tools produced were sharper and stronger than the older ones. The improvement of tools led to the expansion of socioeconomic activities above and beyond hunting and gathering.

3. The reliable rainfall and fertile land. Allowed the expansion of agriculture especially the cultivation of permanent crops such as banana in Uganda.

4. Population growth by either natural increase through giving birth or artificial means through immigration which was associated with transformation of the social organization and forming of strong empire.


B. SLAVERY MODE OF PRODUCTION

Slavery refers to a situation in a society where a person is owned by another purposely as an instrument of production. Slavery mode of production was the second mode of production and the first exploitative mode of man by man. The emergence of surplus production created two different classes these were the rich and the poor. Under slavery systems, the slaves could not acquire wealthy and could not cultivate own land.

Slavery in Africa existed in;
Egypt where they constructed dams and pyramids.
Chagga, Haya, Ganda, Hehe. Kerewe and Sambaa in East Africa interior. 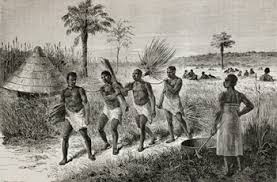 Features of Slave Mode of Production

4. Existence of surplus production. There were extra products due to the use of advanced tools and improved skills of man to control his environment. The slave masters owned surplus production produced by slaves.

5. Existence of political institutions; these began to emerge and existed in various areas example slave masters had state apparatus such as army, prisons and police which were employed in exploiting and suppressing slaves.

6. Class struggle existed between slaves and slave masters; the slaves started to resist in form of strikes, rebellions, idling and running away.

Feudalism was the third mode of production and second pre-capitalist mode of production based on exploitation of man by man. The term feudalism originated from the Germany word “feud” which means fees. In this context fees refer to payment of tax. The economy of feudal society was based on private ownership and renting of land and livestock by the ruling classes. 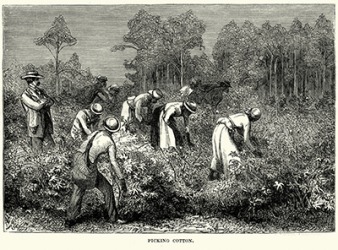 2. Payment of rent to the land lords; rent was paid in various forms.
Labour rent; existed in form of labour or service in which peasants (serf) were required to work for three days in week for the land lords.
Rent in kind: The serfs regularly had to deliver the quantities of his products to the land lords. The products could be in form of grain, cattle or vegetables.
Money rent: Was the system in which money used as a major means of paying rent.

3. Exploitation of man by man example peasants (serf) were exploited by land lords and the distribution of production was not equal.

4. Little freedom to peasant; peasants were tired due to various restrictions as they were treated as children.

5. Private ownership of major means of production such as land, mining sites, houses and cattle all these belonged to feudal lords.

9. Existence of strong political institutions in form of kingdoms and empires example Bunyoro, Buganda and Karagwe. Feudalism in Africa existed in various forms. Its nature depended on place in which it was practiced for instance societies that exercised feudalism were those found in the interlacustine region of East Africa, South Africa, West Africa and the North Eastern Africa.

10. Improved productive forces:Especially tools applied in agriculture and military warfare, this was brought about by iron technology. Generally, African kingdoms such as Buganda and some forest states of West Africa, used means of production centered around either land or livestock-especially cattle-peasants could use the land freely but they were required to pay rent.

1. Nyarubanja System
In this form of feudalism the major means of production was land. Under Nyarubanja system in Buhaya and Karagwe there was two classes, that is the Batwazi (ruler) and Batwana (serfs). These two classes had to pay rent in kind and rent in labour services to the land lords. In Buganda Nyarubanja system known as Mvunjo and Busulo, there were two classes that is Bataka (chiefs) and the poor people who rendered labour service and paid of their products to the land lords known as Bakopi.

Under the system labour services provider was known as Akasamvu and part of their products was provided to the ruling class known as Obusulu. Bunyoro was the kingdom practiced feudalism in East Africa. The kingdom was divided into provinces known as Saza’s under chiefs. Also there was caste system in East Africa under this feudal system there was two classes which were Bahima (pastoralists) and Bairu (agriculturalists). Bahima who were pastoralists dominated and employed the Bairu who were agriculturalists. It was common in Rwanda, Burundi and Buhaya.

2. Umwinyi System
It was another form of feudalism found along the coast of East Africa. Wamwinyi controlled the productive forces such as land, serfs and tenants, also monopolized the political and economic power. The serfs and tenants were given land by Wamwinyi (feudal lords) to live on them in return of labour services and tributes which were paid to Wamwinyi. Before Arabs colonization the Mwinyi mkuu was the greatest land lords and ruled Zanzibar with the help of Shehe in Unguja and Diwani in Pemba.

3. Ubugabire System
It was another form of feudalism practiced among the Tutsi and Hutu in Rwanda and Burundi. The Tutsi (donor) also known as SEBUJA could transfer their cattle to the Ifutu (recipient) as sometimes known as BUGABIRE. The Omugabire and his family were obliged to perform several duties for the masters including house building cultivating.

4. Ntemi System
This was practiced among the Nyamwezi and Sukuma. The power of ruler was based on the control of land. The Mtemi organized his people to open up new land wherever it was available. The process of opening up new land was known as Kutema.

1. The weaker people in the society were protected by the king or the rich land owners. For example, among the Rwandans, the Tutsi had an obligation to protect their tenants, the Hutu.

2. The land owners gave all poor people in the society a piece of land to cultivate. This way, everyone had a means of earning a living.

3. There was a piece in the state as the rich classes maintained law and order.
4. The rich supported the poor with food during drought and famine.

5. The society were highly stratified, with each class of people knowing their position and role. In this way, the feudal societies were very organized.

1. The rich exploited labour force of the poor.
2. Only a few people in society owned land.

3. There was inequality in society between the rich and the poor.

4. The peasant were forced to undertake military duties and endanger their lives for their landlords.

5. It encouraged inter-community warfare as landlords fought in order to increase their land and vassals.