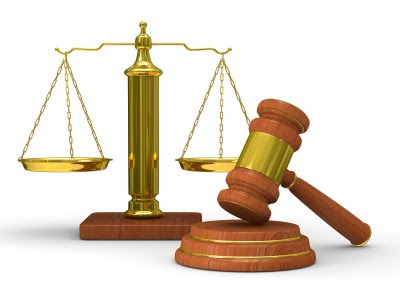 Human rights are basic things that all human beings are entitled to and which nobody should interfere with. Such rights include life, ownership of property, education, marriage, health care and housing. Others are equality before the law, security, freedom of association, privacy and freedom of worship.

In most countries, human rights are based on the Universal Declaration of Human Rights. They are also included in the constitution of countries as the Bill of Rights. The Bill of Rights shows the rights and freedoms that citizens have in their country. Freedom is the right to do or say what one wants without being stopped by any one. 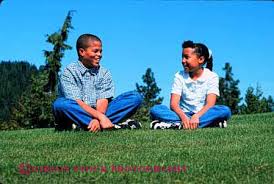 These points can be summarized into three categories as follows:

3. Environmental and developmental rights. These are rights people have to live in an environment that is clean and free of pollution. People also have a right to wealth and natural resources, self-determination and peace.

The constitution of Tanzania presents the right to equality in two parts as follows:

2. Equality before the law- In this part, the Constitution provides people with the right to be treated fairly before the law and to be protected without any kind of discrimination or favor.

The constitution represents these rights in four parts as explained below:

1. Right to live - The Constitution states that every person has the right to live and have his or her life respected by society according to the law.

2. Right to personal freedom - According to the Constitution, everyone has the right to live as a free person, without being restricted by anyone else.

3. Right to privacy and personal security- According to the constitution, every person has the right to be respected and to live and communicate without public attention.

Freedom of expression is presented in four parts as follows:

1. Freedom of expression - Every citizen has the right to form opinions and to air those opinions. He or she is free to communicate without interference.

2. Freedom of religion - Every person has the right to belief of faith, freedom of thought and choice in matters of religion.

3. Freedom of association - Every citizen is free to assemble, associate and communicate with other people. A Tanzanian citizen has the right to express views and join lawful associations or organizations.

4. Freedom to participate in public affairs - The Constitution guarantees every citizen the right to take part in leadership matters that is the right to elect or be elected into public office. Every Tanzanian citizen has the right to participate fully in making decisions on matters affecting him or her, his or her well-being or the nation.

The right to work is presented in three parts. These are:

1. Right to work - Every citizen has the right to work, equal opportunity to work and to hold any office.

3. Right to fair remuneration - Every citizen who works has the right to a fair salary according to his or her work. All the rights and freedom guaranteed in the Constitution have their limitations. Every citizen who enjoys these rights and freedom must obey the laws of the country. In exercising his or her rights, a citizen should also take into consideration the rights of others.


THE IMPORTANCE OF HUMAN RIGHTS IN OUR SOCIETY

These rights give citizens liberty and equality. They also allow citizens to participate in political mattersin their communities or societies. The rights incude:

1. The right to life – This right states that everyone has a right to live. It also disallows the death penalty for people below 18 years, pregnant women and insane people.

2. The right to equal protection by the low – This right seeks to ensure that laws and law enforcing authorities treat all people equally.

3. Freedom of expression – This right helps ensure that people are free to exchange ideas and opinions.

4. Freedom of religious and conscience – This right ensures that no-one is punished or penalized in any way because he/she chooses one religion over another or opts for no religion at all.

5. Freedom of association – This right that ensures people are free to belong to any organization of their choice. It gives individuals the right to meet and interact with others with whom they have common interests.

These rights give people the opportunity to participate in the social, economic and cultural activities of their community or society. They are also concerned with the provision of basic needs such as food, shelter, health care and education.

Social and economic rights are divided into the following two categories:

1. Social rights – These include freedom from discrimination on grounds of race, gender or religion, the right to marry and have a family and the right to privacy, education, recreation and health care.

2. Economic rights – They include the right to work, housing, reasonable standard of living and housing.

Rights under this category seek to do the following:

1. Guarantee people's right to live in a free and safe environment that is clean and free
from pollution and protected from destruction.

2. Give people the right to have their culture recognized, or to advance themselves
politically and economically.

Human Rights and the Provision of Basic Needs

Basic needs are things that are essential for survival. They include food, shelter and clothing. Human rights are related to the provision of basic needs. Social and economic rights give people the opportunity to participate in social, economic and cultural activities that help them meet their basic needs. These activities include agriculture, business, manufacturing, employment and education. Human rights also enable people to work together as members of society in order to improve their living conditions.

Promotion of human rights is done to encourage people to respect and value human rights. This is done in the following ways:

1. The government promotes human rights by recognizing and including them in the constitution.

2. The government accepts and respects international obligations on human rights.

3. Tanzania is signatory to various international agreements on human rights.

4. The government has set up acommission on human rightsand good governance. This commission is given power to promote and protect human rights.

5. The constitution of Tanzania allows for a multiparty system on government in which people are free to join any political party of their choice. This promotes Democracy and therefore the freedom of expression.

6. The courts of law have final say on legal matters.

Protection of human right means ensuring that human right are not abused. Human rights should be protected and respected for the following reasons:

1. They help to regulate and control the power and actions of the government.
2. They are the foundations of justice, peace and freedom.

3. They promote democracy. This means the citizens’ wishes are respected by the government.

5. They bring about social equality and discourage any form of discrimination.

The Ways in which Human Rights are Protected in Tanzania

1. The Tanzania constitution includes a Bill of Rights to protect human rights.

2. The government educates the public about their civil rights which are guaranteed in the constitution. It also practices the rule of law by setting up a system of checks and balance (such as law courts and police force) to ensure that human rights are respected.

3. Non-Governmental organizations educate the public and put the pressure on the
government to change oppressive laws.

4. The press informs the public about violations of human rights.

Human rights have limitations because there is no absolute freedom as all freedom is within certain boundaries. In a democratic society, such limitations should be reasonable, non-discriminatory and justifiable. The main reason for setting boundaries within which human rights are exercised is to protect the interests of other people.

The Meaning and Purpose of Limitations of Individual Human Rights

Everyone is free to enjoy his/her rights but in so doing one should not interfere with the rights of others. For example, freedom of speech does not mean a person is allowed to insult others. Other examples of limitations while exercising one's rights include:

1. Freedom of expression – If a person uses abusive language he/she can be arrested. An individual's right to freedom of speech does not mean one is allowed to insult other people.

2. Freedom of assembly – This can be limited if an assembly is likely to harm other People

3. Freedom of Association – People who have bad intentions, such as criminals, cannot be allowed to associate with the public as their actions are likely to harm others.

Abuse of human right is the unlawful prevention of a person`s enjoyment of his or her right as outlined in the constitution.

Parents can Abuse the Rights of their Children by:
1. Denying them education
2. Not providing basic needs, such as food and clothing for their children
3. Forcing their children to marry against their wishes, especially at a tender age
4. Giving their children severe punishment

Society can Abuse an Individual’s Right through:
1. Beating and killing suspected criminals without giving them a fair trial in a court of law.
2. Abandoning children in the streets
3. Stigmatizing less fortunate members of the society, such the disabled and people living with HIV/AIDS.


The Government can Abuse Human Rights through:
1. Making oppressive laws that limit anindividual’s rights
2. Discriminating against citizens due to their race, gender, religion or ethnic group.
3. Not including a bill of rights in the constitution.
4. Not maintaining the rule of law.

1. Conflicts among family members and in the community. This leads to unrest and instability in the society due to the increase of crimes.

2. Conflicts between citizens and their government. This makes it difficult for the government to enforce law and order.

3. Citizens being unable to perform their duties and responsibilities in peace.
4. Increased crime and poverty in the society

5. Oppression of less fortunate members in society. For example, workers may be
underpaid or the poor may be denied justice in the court of law.

6. Citizens beingunable to obtain their basic needs when the right to work is denied or
abused.

Differences between Limitations and Abuse of Human Rights 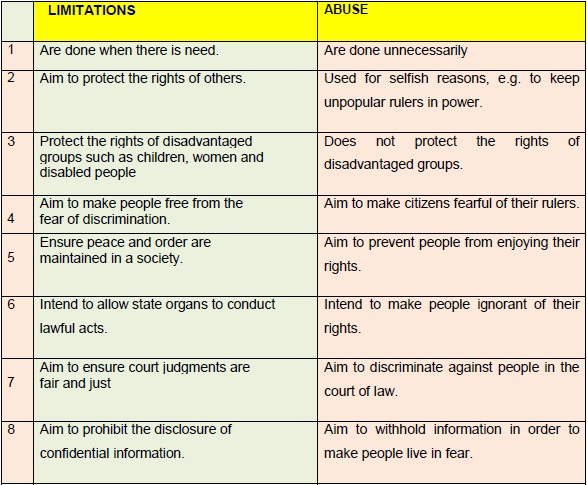 2. The government should educate its citizens about their basic rights so that they can claim them when they are denied.

3. The society has to respect all people, including the sick and disadvantaged.

4. The court of law should enforce the law in a just manner and punish those who abuse the rights of others, such as thieves and murderers.

5. There should be a system tocontrol the activities of the government, e.g. the existence of a particular law to prevent the abuseof power.

6. The government should be transparent in its operations. Citizens should be kept informed about issues affecting them.

7. All people should be treated fairly and equally before the law. No one should be discriminated against because of their race, religion, gender or status in the society.