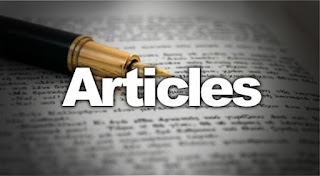 - An article is a word used to modify a noun, which is a person, place, object, or idea.

- An article is a word that comes before a noun to show if it's specific or general.

- Articles are determiners or noun markers that function to specify if the noun is general or specific in its reference. ("a," "an," and "the")

- Articles are words that you use with nouns.

- Articles are words that you use with nouns. An article determines the noun. The articles in the English language are the, a, an:

- An article is any member of a class of dedicated words that are used with noun phrases to mark the identifiability of the referents of the noun phrases.

- An article is a word that is used to indicate that a noun is a noun without describing it.

An article is a word that is used to indicate that a noun is a noun without describing it. For example, in the sentence Nick bought a dog, the article a indicates that the word dog is a noun. Articles can also modify anything that acts as a noun, such as a pronoun or a noun phrase.

Often, a sentence needs an article before a noun in order to make grammatical sense. For example,

Incorrect: I have box.

Correct: I have a box.

Correct: She opened the door.

Incorrect: French is spoken by French.

Correct: French is spoken by the French.

In English, there are only three articles. They are:

The following sentences show examples of how we use articles in sentences:

- The zoo has an elephant enclosure.

- I have a younger brother and an older sister.

- The ancient Romans built the Coliseum.

- Who lives in a pineapple under the sea?

We can separate the articles into two different types. Definite and Indifinite Articles

-- She gazed at the moon. (The Earth only has one moon)

2. A definite article is used to refer to specific things that both the speaker and the listener know the identity of.

-- The kids are playing outside. (Both the speaker and listener know the identity of the kids.)

In writing and speech, the word the is typically used after the speaker or writer first introduces a thing that they are talking about. The word the then references back to this same thing. For example,

-- We saw birds by the lake. The birds were building nests. (The word the indicates that the birds in the second sentence are the same birds mentioned in the first sentence.)

1. Indefinite articles are used to refer to things that aren’t unique.

-- Raquel is a doctor. (Raquel is just one of the many doctors in the world.)

-- France is a country. (France is one of many countries.)

2. Indefinite articles are used to refer to nonspecific things.

-- Please hand me an envelope. (You can hand me any envelope you can find.)

In this same sense, indefinite articles are often used to refer to something as an idea or concept.

3. Indefinite articles are used to refer to things that the speaker and listener don’t know the identity of.

-- A woman is standing outside. (We don’t know who the woman is.)

In writing and speech, indefinite articles are often used to introduce the first mention of a noun. Once the noun has been introduced, it is then possible to use a definite article.

-- A truck drove past. The truck was huge. (The noun truck is introduced with the definite article a. After it is introduced, we can use the to refer back to the same truck.)

Correct: I have a cat.

Incorrect: I have a cats.

Some nouns do not take articles. Unfortunately, there is no general rule for when this happens, and you’ll just need to learn these instances as you encounter them. Some common types of nouns that don’t typically use articles include:

-- Languages: I studied Russian. She speaks Spanish and Portuguese.

-- Sports: He plays football. We watched basketball on TV.

-- School subjects: She loves math. He is bad at chemistry.

-- Names: Meghan lives with Ken. I gave a biscuit to Princess, my poodle.

-- Abstract nouns: She has impressive speed. The professor gave a lecture on communism.

Many nouns (including some that fit into the categories above) may take an article only in some instances, depending on how they are used in a sentence. Some examples of this include:

-- Countries: We went to Colombia. She lives in the Netherlands.

-- Uncountable nouns: The bottle was full of water. The water was polluted.

-- Plural nouns: He is allergic to peanuts. She gave the peanuts to an elephant.

-- Nouns that can be both abstract and concrete: My son is at school. They are building a school near the library.

-- Times of day: Bats hunt for food at night. It was a lonely night.

-- Seasons: Winter came quickly this year. The winter was long and harsh.

-- Transportation: I get nauseous when traveling by boat. The sailors sat on the boat.

Articles are words that define a noun as specific or unspecific. Consider the following examples:

After the long day, the cup of tea tasted particularly good.

By using the article the, we’ve shown that it was one specific day that was long and one specific cup of tea that tasted good.

After a long day, a cup of tea tastes particularly good.

By using the article a, we’ve created a general statement, implying that any cup of tea would taste good after any long day.

English has two types of articles: definite and indefinite. Let’s discuss them now in more detail.

Exceptions: Choosing A or An

There are a few exceptions to the general rule of using a before words that start with consonants and an before words that begin with vowels. The first letter of the word honor, for example, is a consonant, but it’s unpronounced. In spite of its spelling, the word honor begins with a vowel sound. Therefore, we use an. Consider the example sentence below for an illustration of this concept.

Similarly, when the first letter of a word is a vowel but is pronounced with a consonant sound, use a, as in the sample sentence below:

This holds true with acronyms and initialisms, too: an LCD display, a UK-based company, an HR department, a URL.

Article Before an Adjective

Sometimes an article modifies a noun that is also modified by an adjective. The usual word order is article + adjective + noun. If the article is indefinite, choose a or an based on the word that immediately follows it. Consider the following examples for reference:

Eliza will bring a small gift to Sophie’s party.
I heard an interesting story yesterday.

Uncountable nouns are nouns that are either difficult or impossible to count. Uncountable nouns include intangible things (e.g., information, air), liquids (e.g., milk, wine), and things that are too large or numerous to count (e.g., equipment, sand, wood). Because these things can’t be counted, you should never use a or an with them—remember, the indefinite article is only for singular nouns. Uncountable nouns can be modified by words like some, however. Consider the examples below for reference:

Please give me a water.

Water is an uncountable noun and should not be used with the indefinite article.

Please give me some water.

However, if you describe the water in terms of countable units (like bottles), you can use the indefinite article.

Note that depending on the context, some nouns can be countable or uncountable (e.g., hair, noise, time):

Possessive pronouns can help identify whether you’re talking about specific or nonspecific items. As we’ve seen, articles also indicate specificity. But if you use both a possessive pronoun and an article at the same time, readers will become confused. Possessive pronouns are words like his, my, our, its, her, and their. Articles should not be used with pronouns. Consider the examples below.

Why are you reading the my book?

The and my should not be used together since they are both meant to modify the same noun. Instead, you should use one or the other, depending on the intended meaning:

Occasionally, articles are omitted altogether before certain nouns. In these cases, the article is implied but not actually present. This implied article is sometimes called a “zero article.” Often, the article is omitted before nouns that refer to abstract ideas. Look at the following examples:

Many languages and nationalities are not preceded by an article. Consider the example below:

Sports and academic subjects do not require articles. See the sentences below for reference: