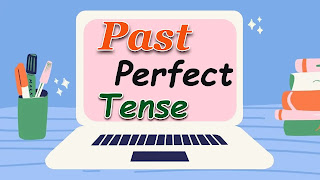 The Meaning of Past Perfect Tense

The past perfect is a verb tense which is used to show that an action took place once or many times before another point in the past.

The past perfect, also called the pluperfect, is a verb tense used to talk about actions that were completed before some point in the past.

The past perfect refers to a time earlier than before now. It is used to make it clear that one event happened before another in the past. It does not matter which event is mentioned first - the tense makes it clear which one happened first.

The past perfect tense is for talking about something that happened before something else.

Past perfect is a type of verb form, generally treated as a grammatical tense in certain languages, relating to an action that occurred prior to an aforementioned time in the past.

The Past Perfect tense is quite an easy tense to understand and to use. This tense talks about the "past in the past".

The past perfect tense describes a completed activity in the past. It is used to emphasize that an action was completed before another action took place.

The past perfect is formed using had + past participle. Questions are indicated by inverting the subject and had. Negatives are made with not.

How do we make the Past Perfect tense?

The structure of the Past Perfect tense is:

The auxiliary verb (have) is conjugated in the Past Simple: had

The main verb is invariable in past participle form: -ed (or irregular)

For negative sentences we insert not between the auxiliary verb and the main verb.

For question sentences, we exchange the subject and the auxiliary verb.

Look at these example sentences with the Past Perfect tense:

Contraction with Past Perfect

When we use the Past Perfect in speaking, we often contract the subject and the auxiliary verb. We also sometimes do this in informal writing:

In negative sentences, we may contract the auxiliary verb and “not”:

The ‘d contraction is also used for the auxiliary verb would. For example, we’d can mean:

But usually the main verb is in a different form, for example:

It is always clear from the context.

How do we use the Past Perfect tense?

Look at some more examples:

I wasn’t hungry. I had just eaten.

They were hungry. They had not eaten for five hours.

I didn’t know who he was. I had never seen him before.

For example, imagine that you arrive at the station at 9:15am. The stationmaster says to you:

Later, you tell your friends:

We often use the Past Perfect in reported speech after verbs like: said, told, asked, thought, wondered

He told us that the train had left.

I thought I had met her before, but I was wrong.

He explained that he had closed the window because of the rain.

I wondered if I had been there before.

I asked them why they had not finished.

MORE ISSUES ABOUT PAST PERFECT TENSE

USE 1 Completed Action Before Something in the Past

USE 2 Duration Before Something in the Past (Non-Continuous Verbs)

IMPORTANT Specific Times with the Past Perfect

Unlike with the present perfect, it is possible to use specific time words or phrases with the past perfect. Although this is possible, it is usually not necessary.

If the past perfect action did occur at a specific time, the simple past can be used instead of the past perfect when before or after is used in the sentence. The words before and after actually tell you what happens first, so the past perfect is optional. For this reason, both sentences below are correct.

The examples below show the placement for grammar adverbs such as always, only, never, ever, still, just, etc.

You can do this grammar quiz. It tests what you learned on the Past Perfect page.