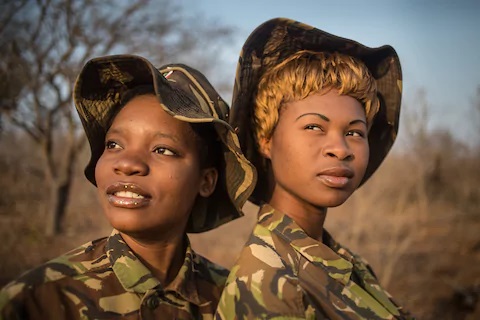 GIRLS AT WAR
By Chinua Achebe

Chinua Achebe’s short story “Girls at War” is a commentary on gender roles, reflecting the interpersonal struggles that arise when someone does and doesn’t meet the expectations placed on them by society.

Girls at War takes place during the Nigerian War and the main character, Reginald, appears to be a kind of deliveryman, making sure supplies get to where they’re needed.

PLOT
- Straightforward narration. The story is told in a straightforward narration in which the author narrates the events occurring in the story linking them in a cause and effect relationship. Each event that occurs later in the plot of the story seems to be a necessary consequence of the preceding event or earlier situations in the past. However the civil war is treated not only as the main cause that puts the story and the related events in motion but also it leads to the subsequent effects seen in the story.

- Flashback; there is the use of flashback in the story when Nwankwo and Gladys discuss the years back when he had warned her to go back to school and not to join the military because girls were not required. But also the way women, girls and children were so determined to stage a revolution.

THE TITLE OF THE STORY
The title of the story “Girls at war” has two levels of meaning.
a.      In a direct sense there is a military war. There are girls who joined the military to fight and defend their new nation. Gladys joined the Civil Defence with other girls and women for the same reason, hoping that the war would end in a short time and they would enjoy the fruits of their fight. They were wrong.
b.      In a subtle sense there is a war for survival. This is divided into two categories;
§      Prostitution. When the military war takes longer than expected and their dreams do not come true, the girls who were once committed to defending their nation change their priorities. They start another war – engaging in prostitution in order to get food. They sell themselves so cheaply to the soldiers who give them the money for survival. One drunkard comments that even one American dollar is enough to make them sleep with a man.
Even Gladys herself admits this when she says to Nwankwo “that time done pass. Now everybody want survival. They call it number six. You put your number six; I put my number six. Everything alright”(p.103)
§      Petty business: Also some girls decided to engage in petty businesses as Nwankwo comments about Gladys friend;“She will come back on an arms plane loaded with shoes, wigs, pants, bras, cosmetics and what have you, which she will then sell and make thousands of pounds. You girls are really at war, aren’t you?” (p.102)
Setting
The setting of the story is Nigeria during the civil war. There are sub-settings which are names of Nigerian towns and villages that that make up the setting of the story. These include; Enugu, Onitsha, Oweri and Nkwerri.
Style
The story has employed various techniques to pass the message across;
§      Monologue; the story is largely told in a monologue style in which case the author takes the role of the narrator and informs us what is happening in the society.
§      Dialogue; to bring the events and characters to life, he has included the dialogues in the story. For example one such a dialogue is recorded in page 94 between Gladys and Nwankwo.
‘Are you satisfied?’ he demanded.
‘Yes, sir. Can I see your pigeonhole?’
‘Christ Almighty!’
‘Sorry to delay you, sir. But you people gave us this job to do.’
This adds livelihood to the story.
§      Point of view. The story is told in an omniscient third person point of view because the author narrates even the thoughts of characters.

LANGUAGE USE
The language used is simple and easy to understand. The linguistic variation also reflects the social stratifications in this society.
§      Pidgin English has been used for to represent people of lower class like the driver, houseboy and Gladys. The house boy says for instance “If no to say de ting de kill porson e for sweet for eye”. Those in high class like Nwankwo speak Standard English.
§      Derogatory language has been used to show filthiness in the society. The soldier abused the Red Cross man who had spoken the truth about the terrible situation the society had reached.  He calls him “Fucking beast!”
§      The author has employed some literary devices to colour his literary piece. Some of these literary devices are;
Symbolism.
§      Gladys. She is used as a symbol of a morally corrupt society. She represents all the other girls who were once committed to their duties but the war turned them into distinguished prostitutes. He says “Gladys was just a mirror reflecting a society that had gone completely rotten and maggoty at the centre” (p.106)
§      Nwankwo. He represents corrupt and selfish leaders. Although Nwankwo pretends to be sympathetic of the entire situation, he too takes advantage of the war for his own selfish interest.
§      Charley’s death. It represents the innocent people who are dying every day at the war front or supplying relief but they have no party in the quarrels.
§      The birthday party. It is used as a symbol of betrayal, moral corruption and extravagance in the society. It is not sensible to think that the soldiers could be throwing parties, dancing and having sex with girls while their fellows at the war fronts have no food and are dying fighting for their nation.
Euphemism
§      The author has used euphemisms in some cases omitting offensive words when he describes the act of having sex in more or less indirect language. For example he says “? A head of stock fish, that’s all, or one American dollar and they are ready to tumble into bed” (p.104). Also in page 105 ‘you want to shell? She asked. And without waiting for an answer said, ‘Go ahead but don’t pour in troops
Simile
§      The high whistle descended like a spear…(p.109)
§      His friends clung like drowning men. (p.100)
§      It was clear as daylight to him now that she was kept by some army officer. (p.106)
§      some of the cheap stuff they brought in from Lisbon which was about as strong as a dry cocoyam leaf in the harmattan”
Metaphor
§      Gladys was just a mirror reflecting a society that had gone completely rotten…(p106)
Saying
§      Monkey de work, baboon de chop. (p.101)
§      It is when a man is drunk that he speaks what is on his mind. (p104)

Reginald Nwankwo
§      He is an officer in the Ministry of Justice.
§      He is sympathetic. He sympathises with the civilians who are affected by the war but he has nothing he can do to help them all. He just offers to help a few of them like giving a lift to Gladys and the wounded soldier.
§      He is a womanizer/promiscuous/infidel. He sleeps with Gladys in his house despite the fact that he is married and his wife is in the village.
§      He is an opportunist. He uses his position as a government officer to get the food supply from the relief centres and send it to his family. He also uses Gladys problem and turns it into an opportunity to sleep with her in exchange for food as the author says “Nwankwo saw an opportunity there and took it at once (p.99).
§      He is a betrayer. He betrays his wife by having extramarital affair with Gladys.
§      He is primitive. He is not aware of the dangers of reusing the condoms. So he sleeps with Gladys using a condom that has been used and washed out.
Gladys
§      She is an officer in the Civil defence. She is among the girls who joined the military in order to defend their new nation.
§      She is courageous. She is advised by Nwankwo not to join the military but she joins the Civil Defence nevertheless. She also shows great courage and determination when she searches the car of the Officer from the Ministry of justice while others in other checkpoints left him to move uninspected.
§      She is sympathetic. She feels sympathetic to the wounded soldier because all rushed to the bush leaving him behind after noticing a threat from air raid planes. They both die of a bomb blast in her struggle to save the wounded soldier.
§      She engages in prostitution. Her dreams and ambitions of defending their nation eventually vanish and the need for food takes over. She betrays her ideals and starts engaging in prostitution in order to get food. (The war for survival).
§      She is an opportunist. She uses the opportunity of being known to Nwankwo to attract material support from him. She reminds him that they had met before, she asks for a lift and eventually they sleep together in which case she gets food in exchange.
§      She is a beautiful girl. The author describes her as “a very beautiful girl as she was dressed in a breasty blue jersey, khaki jeans and canvas shoes with the new style hair plait which gave the girl a defiant look” (p.94)
Soldiers
§      They are Womanisers. They sleep with women and girls and give them the money to buy food. One drunkard suggests that even a head of stock fish or one American dollar is enough to make a girl go to bed with a soldier.
§      They are Opportunists. They use the economic hardships the girls are going through to exploit them morally and sleep with them.
§      They are Betrayers. The soldiers have betrayed the civilians. While the life of the civilians gets harder and harder because of the war, the soldiers are throwing parties. That is the reason Nwankwo refuses to dance. He says “But what I am saying is that with people like that getting killed and our own boys suffering and dying at the war fronts I don’t see why we should sit around throwing parties and dancing” (p.105)

MESSAGES
§      It is not good to take advantage of someone’s problem for one’s own benefit.
§      Betrayal, selfishness and nepotism are not good as they deny other members of the society their due rights.
§      As much as we can, we should avoid running into wars against each other. Wars have many detrimental effects than benefits.
§      Prostitution is not a solution to one’s problem.
§      Women should be allowed to join the militia. Women are discriminated when it comes to joining the militia but they can sometimes be more instrumental in bringing changes than men.
§      We should fight against hypocrisy in our societies.
§      We should be sympathetic in helping others in need of our help.

RELEVANCE
§      The story is very relevant because almost everything discussed in the story is prevalent in our various societies in different capacities.
§      In our societies especially in big cities prostitution is rampant.
§      Also selfishness and nepotism have become a way of life. People are treated on the basis of know-whom than know-how.
§      There are many countries that are affected by the civil wars and many people have lost their relatives in the process.