3. (a) The Meaning of Earthquakes

- An earthquake is a sudden and rapid shaking of the ground caused by the shifting of rocks deep underneath the earth’s surface.
- Or, Earthquake is the shaking of the surface of the Earth resulting from a sudden release of energy in the Earth's lithosphere that creates seismic waves.

b) The Effects of Earthquakes

ii) They can displace parts of the earth’s crust vertically or laterally.

iii) They can raise or lower parts of the sea floor.
The Agadir earthquake in Morocco in 1960 raised the sea floor of the coast. In some areas the depth of the sea decreased from 400 m to 15 m after the earthquake.

iv) They can raise or lower coastal rocks.
In the Alaskan earthquake of 1899, some coastal rocks were raised by 16 m.

v) They can cause landslide and open up deep cracks in the surface rocks.
The El Asnam earthquake in Algeria, in 1954, destroyed an area of radius 40 km and opened up deep cracks up to 3 m deep.

c) The Ways of Reducing the Risks of earthquakes

i) Refraining from building high-rising structures on the land vulnerable to earthquake as well as strengthening buildings by using reinforced concrete, steel frames, deep foundations and light roofs.

ii) Geologists should detect epicentres and tell the people to evacuate the places likely to be affected by earthquakes.

iii) To avoid constructing very large water bodies like Kariba dam which can cause the earthquakes due to the weight of water and other materials.

iv) Discouraging the use of explosives like dynamites in breaking the rocks during mining and construction operations.


COMPOUND BAR GRAPH REPRESENT THE EXPORT OF CROPS IN TONNES 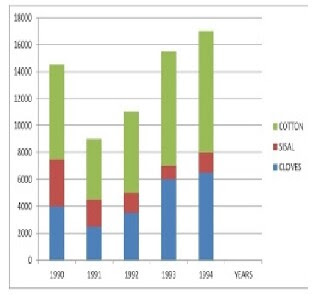 (b)  Two advantages and disadvantages of compound bar graph are

Advantages
(i)  It is easy to read and interpret as the totals are clearly shown.

(ii) It gives a clear visual impression of the total values.

Disadvantages
(i) The graph is very difficult to construct and interpret.

(ii) It is not easy to represent a large number of components as this would involve very long bars with many segments.

5. (a). Sampling technique refers to te style of of collecting samples from the population.

(b).(i) A Sample is the small number of population which represents the whole population

(ii) Random Sampling is a type of probability sampling where by every individual has an equal chance to be selected in a sample. This technique involves selecting a sample randomly from the sampling frame without replacement. E.g. it is very common in Lottery’s such as Bingo and communication companies.

(iv) Stratified  Sampling in this  Sampling Individuals for the sample are selected from different strata. Example: A researchers wishes to get a sample of 20 students from 5 schools he/she will have to select 4 students from each.

(b) The following  are the  procedures of conducting an interview.

(i)    Create friendly atmosphere where two people can talk easily.

(ii)    Maintain warmth and friendliness. It enables respondent to express in detail their thought and feelings.

(iii)  Be neutral in note and don’t suggest any answer.

(iv)   Instill confidence and trust to the respondent by assuming his/her information given would be confidential.

(v)    Explain briefly the purpose of the interview.


6. (a).(i) Leveling is a method or element of land surveying which deals with determining points on land surface above sea level. The points of known height are called benchmarks and they are determined from an assumed zero height point at sea level called datum. It employs leveling instrument such as theodolite and the abney level.
(ii) four benefits of leveling survey are
(b)  Essential equipments used in leveling surveying.

7. (a). Relief features found on this mapped area are hills and mountain due to the presence of  hills name eg Lukoka  hill  and contour lines

(b). Area of whole map of Korogwe

Area of one square on a map = 4cmsquare

(vi) find the area of  whole map of Korogwe

(d) Two centimetres on a map represent one kilometre on the actual  ground.

b) Specify the type of Geographical Photograph  which is:
i) Taken horizontally on the ground
Ground Photograph
ii) Used in map making
Vertical Photograph

9. Tourism refers to the travel of people away from home to other place for recreation, leisure, religious, family, or business purposes, usually of a limited duration. Tourism involves visiting places of interest like wildlife, beaches, museums etc,

Five negative effects of tourism in East Africa are

(i) Tourism poses a threat to natural and cultural resources such as water supply, beaches, coral reefs and pollution
(ii) Tourism can cause events such as terrorism, natural disasters and economic recession.

(iii) The tourists can lead to erosion of traditional cultures and values.

(iv) Bad behavior and overcrowding to the host community

(v) Bad behavior and overcrowding to the host community.

10. Transportation refers to the process of carrying  materials and people from one place to another. Major means of transport are three namely Land, Water and airport transport

(ii) It create employment in Tanzania for example some people are employed as drivers, stations masters etc

(iii) It  encourage the development of Tourism in  Tanzania.

(iv) It can make  goods available where are they demanded.

(v)  It lead to the promotion of trade in the World

(vi) It enhance the accessibility of places.

(vii) It  facilitate spread of technology in Tanzania

(viii) It lead to the intensification of Unity among nations.

11.  Environment refers to all external conditions surrounding an organism and which have influence over its behavior and activities.

Eight environmental problems related to the rapid population growth are

12. (a) Census is an official count or survey of a population, typically recording various details of individuals.

five objectives of conducting census in a country are

(i) Determining the major demographic and socio-economic traits of the population.

(v) Providing data on buildings conditions (private or public) and their occupancy status, so current and future housing needs can properly be evaluated.

(b) Three limitations of census in African countries are