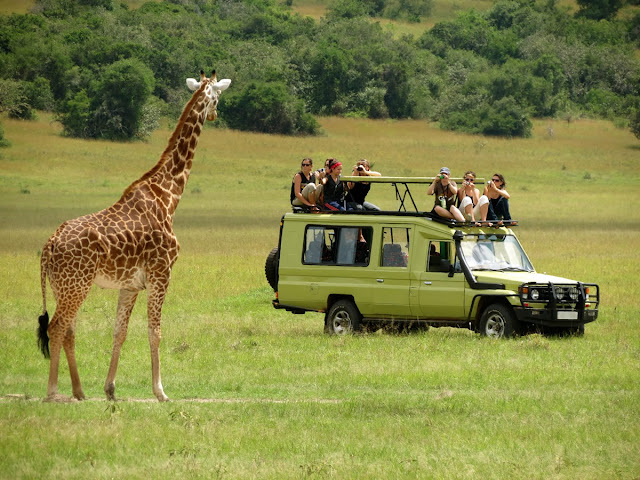 - Tourism is the act and process of spending time away from home in pursuit of recreation, relaxation, and pleasure, while making use of the commercial provision of services.

- Tourism is the business of providing services such as transport, places to stay, or entertainment for people who are on holiday.

- Tourism is travel for pleasure or business; also the theory and practice of touring, the business of attracting, accommodating, and entertaining tourists, and the business of operating tours.

- Tourism is travel for recreational, leisure, or business purposes.

- Tourism is a collection of activities, services and industries which deliver a travel experience comprising transportation, accommodation, eating and drinking establishments, retail shops, entertainment businesses and other hospitality services provided for individuals or groups traveling away from home.

However, tourism overlaps with other activities, interests, and processes, including, for example, pilgrimage. This gives rise to shared categories, such as “business tourism,” “sports tourism,” and “medical tourism” (international travel undertaken for the purpose of receiving medical care).

Criteria for Tourism to happen

Tourism is different from travel. In order for tourism to happen, there must be a displacement: an individual has to travel, using any type of means of transportation (he might even travel on foot: nowadays, it is often the case for poorer societies, and happens even in more developed ones, and concerns pilgrims, hikers …). But all travel is not tourism.

Three criteria are used simultaneously in order to characterize a trip as belonging to tourism.

i) It involves a displacement outside the usual environment.

ii) Type of purpose: the travel must occur for any purpose different from being remunerated from within the place visited:

iii) Duration: There must be a specified time to spend in a place you visit

There are two categories of tourism, namely, Domestic and international tourism.

1. Domestic tourism involves travel within the same country. For example, when people move from Mbeya to Mikumi National Park to view wild animals, this kind of tourism is called domestic tourism.

2. International tourism involves movement from one country to another for leisure, business, education, etc. For example, many people travel from Europe and America to Tanzania to climb Mount Kilimanjaro, or to view other attractive things. 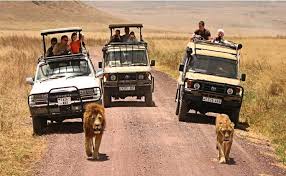 d) Economic Factors
1. Availability of capital to be invested in the tourist industry
2. Advancement in transport and communication  e.g. air transport, road, railway and water. These facilitate accaessibility of different places of interest in the country

e) Religious Factors
People often travel to places of religious importance to seek inner peace, get blessing of their favourite gods and spiritual leaders, attain salvation before death, etc. Examples of places that are well known for their religious significance are Jerusalem in Israel, Mecca and Medina in Saudi Arabia, Varanasi and Amritsar in India, etc.

Importance of Tourism in the World

There is a lot reasons to say Tourism is important, some of them include the following:

5. Source of government revenue
6. Conservation of wildlife and environment and protection of historical sites

7. Economic use of marginal lands
8. Preservation of culture 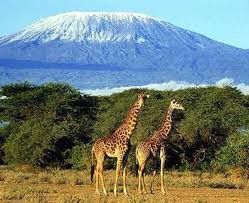 IMPACT OF TOURISM IN THE WORLD

a) Positive Impacts of Tourism

3. Tourism has led to creation of job opportunities. Many people have been employed in the tourist sector, a fact which has helped improve their quality of life.

4. It brings together people of different colours, cultures and religions.

5. It has led to diversification of economies of countries involved in the sector. For example, tourism is now earring more revenue than agriculture and other sectors of the economy in Tanzania.

6. Tourism has enabled sustainable conservation of wildlife and the environment and preservation of cultural heritage and historical sites.

7. It influences development of infrastructure in host countries. In Tanzania, for example, roads to national parks such as Serengeti National Park have been improved

b) Negative Impact of Tourism

1. Bad behaviour and overcrowding to the host community.
2. The tourists can lead to erosion of traditional cultures and values.

3. Tourism poses a threat to natural and cultural resources such as water supply, beaches, coral reefs and pollution.

6. Tourism can cause events such as terrorism, natural disasters and economic recession. 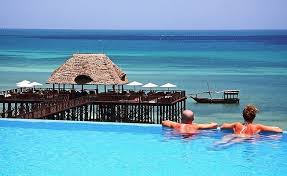 Ways of Addressing the Negative Impact of Tourism

1. Diversification of revenue sources such that when the tourism industry collapses they do not suffer economic difficulties.

2. Laws and policies should be put in place that ensures the revenue accrued from tourism benefits the local community and the government in general.

3. Tourists should be directed to obey the culture and traditions of the host communities.
4. Promotion to conserve and preserve the environment

5. The laws, rules and regulations should be enacted and enforced to combat criminal incidences, child labour, drug abuse, and prostitution

7. The local people should be involved in tourism activities so that they benefit in conserving the tourist attractions like wildlife conservation areas, etc.

8. There should be integration of tourist activities with the protection of the environmental condition through the eco-tourism approach.

Namibia is a newly independent country but the tourism sector has grown very fast within a short period of time. Incidentally tourism is the 3rd largest contributor to the gross domestic product after mining and agriculture. The number of visitors in Namibia has been increasing year after year. For example in 1993 over 368,000 visitors came to Namibia, 560000 in 1996, 615000 in 1997 and over 800000 are projected for the year 2007. The overall growth of the tourism sector is targeted at 10-12 percent per year 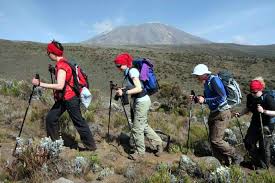 Factors that have Contributed to the Tourism Growth in Namibia

1. Advertisement that has been done by the government and the private sectors
2. Strong policy on promoting the tourism industry

3. Namibia has a favorable investment potentials created by Namibia’s free market economy and the government commitment to promote free enterprise

5. There are a lot of attractions which include:- Climate endowed with beautiful sunshine, Abundant wild life in the game reserves like hardtop and mahango game reserves, national parks like the Etosha and Malili national park, Caprivi Aaan and Viljoen game parks.

6. The establishment of the Namibia stock exchange [NSX] that has attracted foreign investors, has been another contributing factor in the tourism development
7. The hard work made by both the public and private sector. The private sector has invested substantially in the development of infrastructure

9. The aid from European countries has also enhanced the tourism development process in the country

Importance of Tourism to Namibia

1. It has led to the preservation and boosting of the country’s cultural values and norms
2. It has stimulated the further development of infrastructure

3. It has promoted the move towards environmental conservation in the country with an aim of maintaining the country’s beauty

4. It has contributed to the employment creation in the country

5. It has contributed to the gross domestic product. It is the third contributor to the GDP after mining and agriculture

6. Social services have improved in the country especially with the introduction of the community based tourism 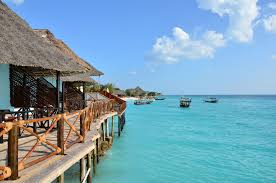 Switzerland is a famous country in the world due to its tourism development. It is also referred to as the playground of Europe since tourism takes place all the year around and many tourists visit Switzerland because of its attractions. There are also different games and sports that are of interests to the tourists.

1. Beautiful scenery made by the Alps Mountains which have U-Shaped valleys pyramid peaks and snow cover. Also presence of water bodies like Geneva which adds to the beauty of the scenery.

2. Its central location in Europe has also led to high accessibility of the country from different directions in Europe and other countries like America etc.

3. Ideal climate which allows the activities to take place both in winter and summer
4. Good hotel management so as to meet tourists demand

5. Availability of skilled labor. This has led to the efficient running of the tourism industry

6. Hospitality of the Swiss people has been another attraction to the tourists

7. Its policy of stability has made peace dwell in the country and hence tourists have been encouraged to visit the country

8. It has international institutions like banks and conference centers used by different nations because of its peace

Importance of Tourism in Switzerland

1. It is the major employer in the country. During the peak season it employs more than 120,000 people. This is six or seven times as many as Tanzanian tourism employments.

2. It has contributed to the earning of foreign exchange in the country hence capital is accumulated from the tourism industry in a great amount.

3. It has stimulated the development of science and technology for example electrification of the railway systems.

4. It has accelerated the foreign responsibility of the Swiss country. This has been followed by the improvement in the international relations between Switzerland and the countries where tourists come from.

5. It has contributed to the provision of employment to the people. 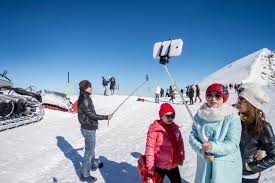 1. Severe cold during winter which leads to the blocking of railway lines
2. Landslides and avalanches are dangerous to the tourists

3. There is competition between the tourism industry and transhumance in the use of the Alps Mountains

4. Steep slopes of the mountain have led to the problems of transport to different parts of Switzerland.

5. Environmental pollution due to the coming visitors

Tanzania with its unique features, is one of the famous countries in the World of tourism.The number of tourists has been incresing year after year. And the increase was a result of efforts made by the government and private tour operators to advertise Tanzania’s tourist potentials in the recent past.

1. Attractive landscape made by the presence of Mountains like Kilimanjaro which is snow capped, active volcanic mountain Oldonyo Lengai (the mountain of God), large lakes like Tanganyika and Victoria, and the remarkable Rift Valley and the Indian Ocean.

3. There are Pre-Hisoric Sites like Olduvai Gorge in the Serengeti plain where visitors get important information of the past.

4. Shifting sand across the Ngorongoro plains, the sand shifts at 17 metres per year.

7. The national language Kiswahili and other languages like English, French and German facilitate communication between the visitors and  the local people. 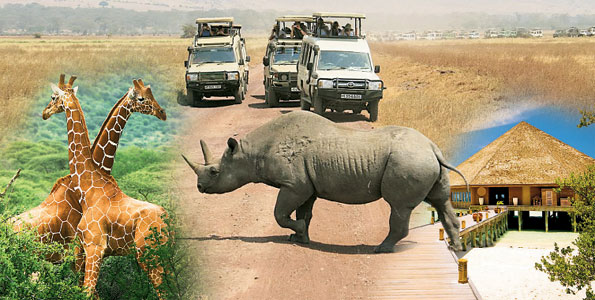 The Importance of Tourism in Tanzania

1. Source of foreign exchange
2. Improvement in the standard of living

3. Source of employment.
4. Improvement of infrastructure

1. Poor transport and communication
2. Poor marketing of the tourist attractions

3. Shortage of capital to develop tourism industry
4. Poor coordination policies government and stakeholders in the industry

5. Crime that caused by tourists from visiting tourism areas.
6. Poaching has led to extinction of some animals

7. Stiff Competition competition from other countries with the same attractions
8. Failure to master different languages creates a communication

Methods Used to Increase the Income of Tourism Industry in Tanzania

Ways of increasing income from the tourism industry include:
1. Marketing and publicity
2. Promotion of domestic tourism

6. Improvement of safety and security
7. Controlling poaching because it reduces numbers of wild animal 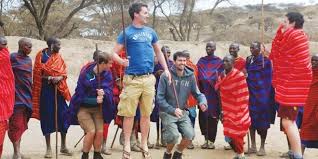 How to Promote Tourism in Tanzania

1. The ministry of Natural Resources and Tourism, through Tanzania Tourist Board (TTB), must promote Tanzania’s tourist attractions through conducting publicity campaigns, preparation and publication of destination brochures and provision of tourist information.

2. Improvement and development of transport and communication infrastructures, particularly in areas with tourist attractions, in order to make these attractions accessible from the town centres.

3. Tourism resources such as national parks and game reserves should be protected from human encroachment. Also the environment on which the animals thrive, such as natural vegetation and water resources should be conserved.

4. There is need to identify and develop tourist attractions and improve the existing ones so as to diversify the tourist activities. Special emphasis should be put on improvement of pre-historical and archaeological sites, most of which are in very poor states.

5. The level of hospitality to tourists must be improved through training of the tourism personnel so as to meet the world’s standards.

6. Attracting both local and foreign investors to put up facilities such as hotels, motels, lodges, etc. for tourists.

7. The political stability, peace and tranquility should be maintained to ensure maximum security to tourists.